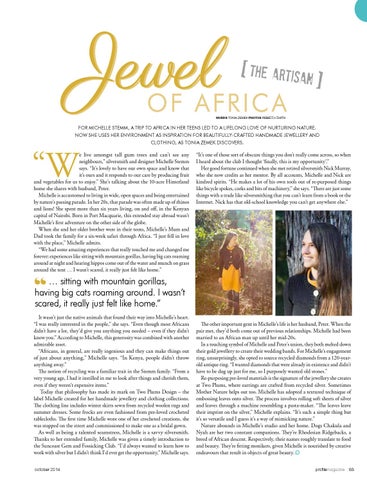 FOR MICHELLE STEMM, A TRIP TO AFRICA IN HER TEENS LED TO A LIFELONG LOVE OF NURTURING NATURE. NOW SHE USES HER ENVIRONMENT AS INSPIRATION FOR BEAUTIFULLY-CRAFTED HANDMADE JEWELLERY AND CLOTHING, AS TONIA ZEMEK DISCOVERS.

e live amongst tall gum trees and can’t see any neighbours,” silversmith and designer Michelle Stemm says. “It’s lovely to have our own space and know that it’s ours and it responds to our care by producing fruit and vegetables for us to enjoy.” She’s talking about the 10-acre Hinterland home she shares with husband, Peter. Michelle is accustomed to living in wide, open spaces and being entertained by nature’s passing parade. In her 20s, that parade was often made up of rhinos and lions! She spent more than six years living, on and off, in the Kenyan capital of Nairobi. Born in Port Macquarie, this extended stay abroad wasn’t Michelle’s first adventure on the other side of the globe. When she and her older brother were in their teens, Michelle’s Mum and Dad took the family for a six-week safari through Africa. “I just fell in love with the place,” Michelle admits. “We had some amazing experiences that really touched me and changed me forever; experiences like sitting with mountain gorillas, having big cats roaming around at night and hearing hippos come out of the water and munch on grass around the tent … I wasn’t scared, it really just felt like home.”

“It’s one of those sort of obscure things you don’t really come across, so when I heard about the club I thought ‘finally, this is my opportunity’.” Her good fortune continued when she met retired silversmith Nick Murray, who she now credits as her mentor. By all accounts, Michelle and Nick are kindred spirits. “He makes a lot of his own tools out of re-purposed things like bicycle spokes, corks and bits of machinery,” she says. “There are just some things with a trade like silversmithing that you can’t learn from a book or the Internet. Nick has that old-school knowledge you can’t get anywhere else.”

… sitting with mountain gorillas, having big cats roaming around. I wasn’t scared, it really just felt like home.” It wasn’t just the native animals that found their way into Michelle’s heart. “I was really interested in the people,” she says. “Even though most Africans didn’t have a lot, they’d give you anything you needed – even if they didn’t know you.” According to Michelle, this generosity was combined with another admirable asset. “Africans, in general, are really ingenious and they can make things out of just about anything,” Michelle says. “In Kenya, people didn’t throw anything away.” The notion of recycling was a familiar trait in the Stemm family. “From a very young age, I had it instilled in me to look after things and cherish them, even if they weren’t expensive items.” Today that philosophy has made its mark on Two Plums Design – the label Michelle created for her handmade jewellery and clothing collections. The clothing line includes winter skirts sewn from recycled woolen rugs and summer dresses. Some frocks are even fashioned from pre-loved crocheted tablecloths. The first time Michelle wore one of her crocheted creations, she was stopped on the street and commissioned to make one as a bridal gown. As well as being a talented seamstress, Michelle is a savvy silversmith. Thanks to her extended family, Michelle was given a timely introduction to the Suncoast Gem and Fossicking Club. “I’d always wanted to learn how to work with silver but I didn’t think I’d ever get the opportunity,” Michelle says. october 2014

The other important gent in Michelle’s life is her husband, Peter. When the pair met, they’d both come out of previous relationships. Michelle had been married to an African man up until her mid-20s. In a touching symbol of Michelle and Peter’s union, they both melted down their gold jewellery to create their wedding bands. For Michelle’s engagement ring, unsurprisingly, she opted to source recycled diamonds from a 120-yearold antique ring. “I wanted diamonds that were already in existence and didn’t have to be dug up just for me, so I purposely wanted old stones.” Re-purposing pre-loved materials is the signature of the jewellery she creates at Two Plums, where earrings are crafted from recycled silver. Sometimes Mother Nature helps out too. Michelle has adopted a textured technique of embossing leaves onto silver. The process involves rolling soft sheets of silver and leaves through a machine resembling a pasta-maker. “The leaves leave their imprint on the silver,” Michelle explains. “It’s such a simple thing but it’s so versatile and I guess it’s a way of mimicking nature.” Nature abounds in Michelle’s studio and her home. Dogs Chakula and Nyah are her two constant companions. They’re Rhodesian Ridgebacks, a breed of African descent. Respectively, their names roughly translate to food and beauty. They’re fitting monikers, given Michelle is nourished by creative endeavours that result in objects of great beauty. profilemagazine 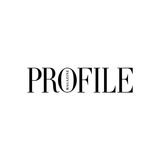