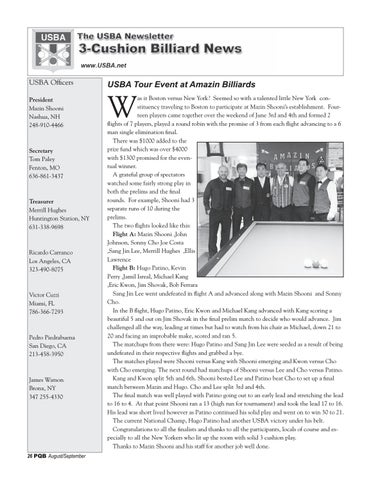 as it Boston versus New York? Seemed so with a talented little New York constituency traveling to Boston to participate at Mazin Shooniâ&amp;#x20AC;&amp;#x2122;s establishment. Fourteen players came together over the weekend of June 3rd and 4th and formed 2 flights of 7 players, played a round robin with the promise of 3 from each flight advancing to a 6 man single elimination final. There was $1000 added to the prize fund which was over $4000 with $1300 promised for the eventual winner. A grateful group of spectators watched some fairly strong play in both the prelims and the final rounds. For example, Shooni had 3 separate runs of 10 during the prelims. The two flights looked like this: Flight A: Mazin Shooni ,John Johnson, Sonny Cho Joe Costa ,Sang Jin Lee, Merrill Hughes ,Ellis Lawrence Flight B: Hugo Patino, Kevin Perry ,Jamil Isreal, Michael Kang ,Eric Kwon, Jim Shovak, Bob Ferrara Sang Jin Lee went undefeated in flight A and advanced along with Mazin Shooni and Sonny Cho. In the B flight, Hugo Patino, Eric Kwon and Michael Kang advanced with Kang scoring a beautiful 5 and out on Jim Shovak in the final prelim match to decide who would advance. Jim challenged all the way, leading at times but had to watch from his chair as Michael, down 21 to 20 and facing an improbable make, scored and ran 5. The matchups from there were: Hugo Patino and Sang Jin Lee were seeded as a result of being undefeated in their respective flights and grabbed a bye. The matches played were Shooni versus Kang with Shooni emerging and Kwon versus Cho with Cho emerging. The next round had matchups of Shooni versus Lee and Cho versus Patino. Kang and Kwon split 5th and 6th. Shooni bested Lee and Patino beat Cho to set up a final match between Mazin and Hugo. Cho and Lee split 3rd and 4th. The final match was well played with Patino going out to an early lead and stretching the lead to 16 to 4. At that point Shooni ran a 13 (high run for tournament) and took the lead 17 to 16. His lead was short lived however as Patino continued his solid play and went on to win 30 to 21. The current National Champ, Hugo Patino had another USBA victory under his belt. Congratulations to all the finalists and thanks to all the participants, locals of course and especially to all the New Yorkers who lit up the room with solid 3 cushion play. Thanks to Mazin Shooni and his staff for another job well done.

After many years and many exciting tournaments the great three-cushion billiard room located in Maywood California - Eight Ball Billiards - is closing. On Saturday June 11th USBA director Ricardo Carranco held the final tournament ever, a USBA Tour Open event. Eight Time USBA champion Pedro Piedrabuena emerged victorious in a very close and hard fought final against Luis Avila 30-28. The players pictured from the finals: Top row (left to right): Bilal Khalifa, Miguel Almaraz, Faustino Galvan, Jesus Gallegos (tournament director), Guillermo Sosa, Rodolfo Covarrubias. Bottom row left to right: Luis Avila, Ricardo Carranco, Pedro Piedrabuena, Jesus Lara (Note: Lara did not make the finals and Salvador Cardenas (9th finalist) is missing from the picture.) Here is a recap of some of the highlights of the event: Preliminaries were 3 flights of 7 players, playing round robin with the top 3 from each flight advancing to a 9-man round robin final flight. Flight A, there were no surprises, as the 3 advancing players (Avila, Almaraz, and Covarrubias) are considered the best players in Mexico. Flight B, saw Piedrabuena and Sosa advance with no problem, and Salvador Cardenas squeezing out a win against Vicky Pineda (30-27) to grab the 3rd spot on the finals. Flight C, saw artistic billiards world champion surprisingly miss out on the finals after 2 losses to Khalifa and Carranco. Mexican master player Faustino Galvan, Ricardo Carranco,

and Bilal Khalifa advanced to the finals. The finals brought many great matches with most finishing in around 20 innings or less. Pedro Piedrabuena had the best game of the tournament beating Ricardo Carranco 30-3 in only 6 innings. He ran 5, 5, 5, 12, 2, and 1. In the last round of the finals, Pedro (1 loss to Sosa) played Avila (1 loss to Galvan). Winner of the match would be crowned champion. Pedro came out on top with a very close 30-28. Avila had to settle for second and Sosa completing the podium. Finishing 4th was Miguel Amaraz and Ricardo Carranco, with 2 surprising wins over top Mexican players, Covarrubias and Almaraz, finished 5th. Thanks to the USBA, and to all players who participated in the last ever tournament at Eight Ball Billiards.

hese two back-up tickies are well within the grasp of most room players, and should definitely be in your arsenal. They’re not always obvious though, (especially the one at right), and I often see players ignore them in favor of much harder shots. Both shots have the same problem: a center-ball hit (the dotted line) will generally spring wide at left, and not come far enough off the short rail at right. The solution is to use the same technique for both: just use English to angle the approach so you hit the first object ball from a steeper angle. This shot selection is best when the object ball is about a ball’s width off the cushion. It can be played further off the cushion than that, but it gets harder pretty quickly. At left, the steeper approach caroms the cue ball off the object ball much closer to the rail, making the shot. Judging the amount of English needed for these shots is always the key. A common error is using too much English, and a good way to approach the shot is to try and have the cue ball go through the hole (you won’t be able to). Soft speed is all that is necessary, and should leave you good position. I like to hit the ball just above center to get it naturally rolling immediately. The shot at right just reverses the approach, as now we want to spring the ball off the cushion. Hitting the cue ball higher gives you a little more “pop” off the object ball, as well

as using some more speed (medium, not hard). Another tip about judging the English necessary is to know that for most people a shot with maximum right English originating from the second diamond on the long rail should bring the cue ball flat alongside the short rail (your stroke may vary slightly). Here we see the cue ball origin is from point A, just above the second diamond. This tells you the cue ball will angle into the short rail slightly, which is just what we want. These shots are not difficult if you spend a little time on the table to get used to the English adjustments needed. Note that max English is not necessary, nor desired, for many of these shots; sometimes just one tip will give you just the little bit of flattening or pop you need.

In my last message, I mentioned that the USBA had been working on few important projects. I’m happy to report that one is wrapped up and tied in a bow. The USBA has entered into an agreement with the Casino Del Sol Resort in Tucson, Arizona, to host USBA 3-cushion tournaments in 2017, 2018 and 2019 years. The Casino Del Sol is a 4-star resort with 6 restaurants, 7 bars/lounges, a full-service spa, a golf course, 215 fully-equipped rooms, a concert venue, an outdoor pool, and, of course, a casino. The resort’s slogan is, “More fun under the sun.” Well, coming next January, the fun will be 3-cushion billiards. The USBA will hold 2 tournaments from January 16 to 21, 2017. The first tournament is a “B” level tournament for 40 players. This will be followed by an “open” tournament, also for 40 players. Both tournaments will be live-streamed. The resort has set a special room price for players and their families. More information will be posted on the USBA website. Over the last several years, the USBA has strived to take 3-cushion billiards outside the pool room. We have played our national tournament in Las Vegas and at the Super Billiard Expo. Our partnership with the Casino Del Sol Resort provides another opportunity to showcase the great game of 3-Cushion billiards. It also gives the USBA members the chance to join as a community to play billiards and relax at the end of the day. See you there!

SPECIAL MEMBERSHIP PROMOTION JOIN or RENEW BETWEEN August 1st till October 30th YOUR 1 YEAR MEMBERSHIP IS ONLY $25 VISIT – WWW.USBA.NET CLICK ON “RENEW YOUR MEMBERSHIP”

To become a USBA member and receive a half year’s subscription to PQB publication for free, fill out and return this form.

n Saturday July 9 twelve players met at Bida Goodays in Houston Texas for another B &amp; C player handicapped event. First place went to Toan Ton playing out of the C group who defeated another C player Fernando Corrales in the final. Pictured above are the final four (L to R) Vu Nguyen and Minh Nguyen who shared third/fourth place, Toan Ton the winner and second place finisher Fernando Corrales. Tim Nguyen the room owner and tournament director has brought regular tournament action back to Houston and the local players have really responded. In this fourth installment of the Saturday one-day tournaments the room was not only filled with players, but with spectators as well. As usual Tim offered up free drinks and lunch to the players, making the day a fun event to share good times with good friends. The intensity of the play at the B &amp; C tournaments is equal to that in the open events, while the quality of the players is clearly improving each week. Saturdayâ&amp;#x20AC;&amp;#x2122;s matches had three players at the B level playing to 15. Nhut Nguyen and Jorge Gonzales were both eliminated by C players with a only a 3-

point added handicap. In a short game anything can happen, but the C player group was surprisingly consistent as the players fought for every point on the table. Tim has done a great job of adjusting the handicaps from week to week, which has yielded a different group in the winners circle for each subsequent event. If you have never played in a tournament, or thought your play was not strong enough to compete, you have to come to one of these handicapped events. Every player has a fighting chance to win some money no matter what their playing ability. Thanks goes out to room owners Tim Nguyen and his brother Nhut for their generous sponsorship of the local tournaments at Bida Goodays in Houston.