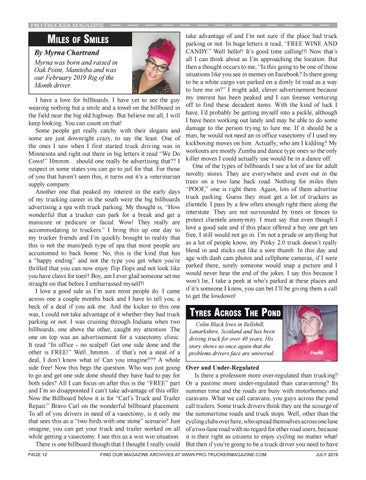 Miles of Smiles By Myrna Chartrand Myrna was born and raised in Oak Point, Manitoba and was our February 2019 Rig of the Month driver. I have a love for billboards. I have yet to see the guy wearing nothing but a smile and a towel on the billboard in the field near the big old highway. But believe me all, I will keep looking. You can count on that! Some people get really catchy with their slogans and some are just downright crazy, to say the least. One of the ones I saw when I first started truck driving was in Minnesota and right out there in big letters it read “We Do Cows!” Hmmm….should one really be advertising that?? I suspect in some states you can go to jail for that. For those of you that haven’t seen this, it turns out it’s a veterinarian supply company. Another one that peaked my interest in the early days of my trucking career in the south were the big billboards advertising a spa with truck parking. My thought is, “How wonderful that a trucker can park for a break and get a manicure or pedicure or facial. Wow! They really are accommodating to truckers.” I bring this up one day to my trucker friends and I’m quickly brought to reality that this is not the mani/pedi type of spa that most people are accustomed to back home. No, this is the kind that has a “happy ending” and not the type you get when you’re thrilled that you can now enjoy flip flops and not look like you have claws for toes!! Boy, am I ever glad someone set me straight on that before I embarrassed myself!! I love a good sale as I’m sure most people do. I came across one a couple months back and I have to tell you, a heck of a deal if you ask me. And the kicker to this one was, I could not take advantage of it whether they had truck parking or not. I was cruising through Indiana when two billboards, one above the other, caught my attention. The one on top was an advertisement for a vasectomy clinic. It read “In office - no scalpel! Get one side done and the other is FREE!” Well...hmmm….if that’s not a steal of a deal, I don’t know what is! Can you imagine??? A whole side free! Now this begs the question. Who was just going to go and get one side done should they have had to pay for both sides? All I can focus on after this is the “FREE” part and I’m so disappointed I can’t take advantage of this offer. Now the Billboard below it is for “Carl’s Truck and Trailer Repair.” Bravo Carl on the wonderful billboard placement. To all of you drivers in need of a vasectomy, is it only me that sees this as a “two birds with one stone” scenario? Just imagine, you can get your truck and trailer worked on all while getting a vasectomy. I see this as a win win situation. There is one billboard though that I thought I really could PAGE 12

take advantage of and I’m not sure if the place had truck parking or not. In huge letters it read, “FREE WINE AND CANDY.” Well hello!! It’s good time calling!!! Now that’s all I can think about as I’m approaching the location. But then a thought occurs to me, “Is this going to be one of those situations like you see in memes on Facebook? Is there going to be a white cargo van parked on a dimly lit road as a way to lure me in?” I might add, clever advertisement because my interest has been peaked and I can foresee venturing off to find these decadent items. With the kind of luck I have, I’d probably be getting myself into a pickle, although I have been working out lately and may be able to do some damage to the person trying to lure me. If it should be a man, he would not need an in office vasectomy if I used my kickboxing moves on him. Actually, who am I kidding? My workouts are mostly Zumba and dance type ones so the only killer moves I could actually use would be in a dance off. One of the types of billboards I see a lot of are for adult novelty stores. They are everywhere and even out in the trees on a two lane back road. Nothing for miles then “POOF,” one is right there. Again, lots of them advertise truck parking. Guess they must get a lot of truckers as clientele. I pass by a few often enough right there along the interstate. They are not surrounded by trees or fences to protect clientele anonymity. I must say that even though I love a good sale and if this place offered a buy one get ten free, I still would not go in. I’m not a prude or anything but as a lot of people know, my Pinky 2.0 truck doesn’t really blend in and sticks out like a sore thumb. In this day and age with dash cam photos and cellphone cameras, if I were parked there, surely someone would snap a picture and I would never hear the end of the jokes. I say this because I won’t lie, I take a peek at who’s parked at these places and if it’s someone I know, you can bet I’ll be giving them a call to get the lowdown!

Tyres Across The Pond Colin Black lives in Bellshill, Lanarkshire, Scotland and has been driving truck for over 40 years. His story shows us once again that the problems drivers face are universal.

Over and Under-Regulated Is there a profession more over-regulated than trucking? Or a pastime more under-regulated than caravanning? Its summer time and the roads are busy with motorhomes and caravans. What we call caravans, you guys across the pond call trailers. Some truck drivers think they are the scourge of the summertime roads and truck stops. Well, other than the cycling clubs over here, who spread themselves across one lane of a two-lane road with no regard for other road users, because it is their right as citizens to enjoy cycling no matter what! But then if you’re going to be a truck driver you need to have

Find our magazine archives at www.Pro-truckermagazine.Com