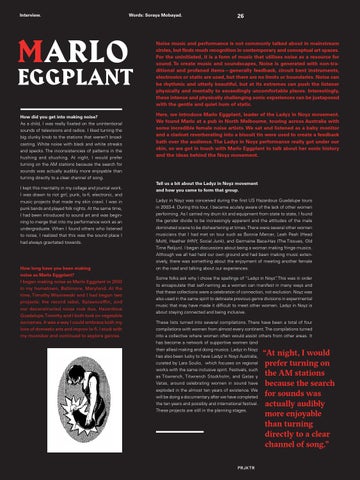 EGGPLANT How did you get into making noise? As a child, I was really fixated on the unintentional sounds of televisions and radios. I liked turning the big clunky knob to the stations that weren’t broadcasting. White noise with black and white streaks and specks. The inconsistencies of patterns in the hushing and shushing. At night, I would prefer turning on the AM stations because the search for sounds was actually audibly more enjoyable than turning directly to a clear channel of song. I kept this mentality in my collage and journal work. I was drawn to riot grrl, punk, lo-fi, electronic, and music projects that made my skin crawl. I was in punk bands and played folk nights. At the same time, I had been introduced to sound art and was beginning to merge that into my performance work as an undergraduate. When I found others who listened to noise, I realized that this was the sound place I had always gravitated towards.

How long have you been making noise as Marlo Eggplant? I began making noise as Marlo Eggplant in 2003 in my hometown, Baltimore, Maryland. At the time, Timothy Wisniewski and I had begun two projects: the record label, Spleencoffin, and our deconstructed noise rock duo, Hazardous Guadalupe.Timothy and I both took on vegetable surnames. It was a way I could embrace both my love of domestic arts and improv lo-fi. I stuck with my monniker and continued to explore genres.

Noise music and performance is not commonly talked about in mainstream circles, but finds much recognition in contemporary and conceptual art spaces. For the uninitiated, it is a form of music that utilises noise as a resource for sound. To create music and soundscapes, Noise is generated with non-traditional and profaned items—generally feedback, circuit bent instruments, electronics or static are used, but there are no limits or boundaries. Noise can be rhythmic and utterly beautiful, but at its extremes can push the listener physically and mentally to exceedingly uncomfortable places. Interestingly, these intense and physically challenging sonic experiences can be juxtaposed with the gentle and quiet hum of static. Here, we introduce Marlo Eggplant, leader of the Ladyz in Noyz movement. We found Marlo at a pub in North Melbourne, touring across Australia with some incredible female noise artists. We sat and listened as a baby monitor and a clarinet reverberating into a biscuit tin were used to create a feedback bath over the audience. The Ladyz in Noyz performance really got under our skin, so we got in touch with Marlo Eggplant to talk about her sonic history and the ideas behind the Noyz movement.

Tell us a bit about the Ladyz in Noyz movement and how you came to form that group. Ladyz in Noyz was conceived during the first US Hazardous Guadalupe tours in 2003-4. During this tour, I became acutely aware of the lack of other women performing. As I carried my drum kit and equipment from state to state, I found the gender divide to be increasingly apparent and the attitudes of the male dominated scene to be disheartening at times. There were several other women musicians that I had met on tour such as Bonnie Mercer, Leah Peah (Head Molt), Heather (HNY, Social Junk), and Germaine Baca-Has (The Tissues, Old Time Relijun). I began discussions about being a woman making fringe musics. Although we all had held our own ground and had been making music extensively, there was something about the enjoyment of meeting another female on the road and talking about our experiences. Some folks ask why I chose the spellings of “Ladyz in Noyz”. This was in order to encapsulate that self-naming as a woman can manifest in many ways and that these collections were a celebration of connection, not exclusion. Noyz was also used in the same spirit to delineate previous genre divisions in experimental music that may have made it difficult to meet other women. Ladyz in Noyz is about staying connected and being inclusive. These lists turned into several compilations. There have been a total of four compilations with women from almost every continent. The compilations turned into a collective where women often would assist others from other areas. It has become a network of supportive women (and their allies) making and doing musics. Ladyz in Noyz has also been lucky to have Ladyz in Noyz Australia, curated by Lara Soulio, which focuses on regional works with the same inclusive spirit. Festivals, such as Titwrench, Titwrench Stockholm, and Gatas y Vatas, around celebrating women in sound have exploded in the almost ten years of existence. We will be doing a documentary after we have completed the ten years and possibly and international festival. These projects are still in the planning stages.

“At night, I would prefer turning on the AM stations because the search for sounds was actually audibly more enjoyable than turning directly to a clear channel of song.” 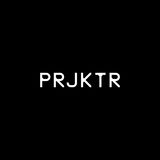