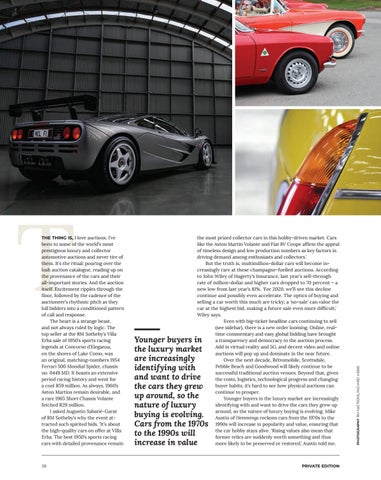 THE THING IS, I love auctions. I’ve

been to some of the world’s most prestigious luxury and collector automotive auctions and never tire of them. It’s the ritual: pouring over the lush auction catalogue, reading up on the provenance of the cars and their all-important stories. And the auction itself. Excitement ripples through the floor, followed by the cadence of the auctioneer’s rhythmic pitch as they lull bidders into a conditioned pattern of call and response. The heart is a strange beast, and not always ruled by logic. The top seller at the RM Sotheby’s Villa Erba sale of 1950’s sports racing legends at Concorso d’Eleganza, on the shores of Lake Como, was an original, matching-numbers 1954 Ferrari 500 Mondial Spider, chassis no. 0448 MD. It boasts an extensive period racing history and went for a cool R59 million. As always, 1960’s Aston Martins remain desirable, and a rare 1965 Short Chassis Volante fetched R29 million. I asked Augustin Sabatié-Garat of RM Sotheby’s why the event attracted such spirited bids. ‘It’s about the high-quality cars on offer at Villa Erba. The best 1950’s sports racing cars with detailed provenance remain

the most prized collector cars in this hobby-driven market. Cars like the Aston Martin Volante and Fiat 8V Coupe affirm the appeal of timeless design and low production numbers as key factors in driving demand among enthusiasts and collectors.’ But the truth is, multimillion-dollar cars will become increasingly rare at these champagne-fuelled auctions. According to John Wiley of Hagerty’s Insurance, last year’s sell-through rate of million-dollar and higher cars dropped to 70 percent – a new low from last year’s 81%. ‘For 2020, we’ll see this decline continue and possibly even accelerate. The optics of buying and selling a car worth this much are tricky; a ‘no-sale’ can value the car at the highest bid, making a future sale even more difficult,’ Wiley says. Even with big-ticket headline cars continuing to sell (see sidebar), there is a new order looming. Online, realtime commentary and easy global bidding have brought a transparency and democracy to the auction process. Add in virtual reality and 5G, and decent video and online auctions will pop up and dominate in the near future. Over the next decade, Rétromobile, Scottsdale, Pebble Beach and Goodwood will likely continue to be successful traditional auction venues. Beyond that, given the costs, logistics, technological progress and changing buyer habits, it’s hard to see how physical auctions can continue to prosper. Younger buyers in the luxury market are increasingly identifying with and want to drive the cars they grew up around, so the nature of luxury buying is evolving. Mike Austin of Hemmings reckons cars from the 1970s to the 1990s will increase in popularity and value, ensuring that the car hobby stays alive. ‘Rising values also mean that former relics are suddenly worth something and thus more likely to be preserved or restored,’ Austin told me.

Younger buyers in the luxury market are increasingly identifying with and want to drive the cars they grew up around, so the nature of luxury buying is evolving. Cars from the 1970s to the 1990s will increase in value