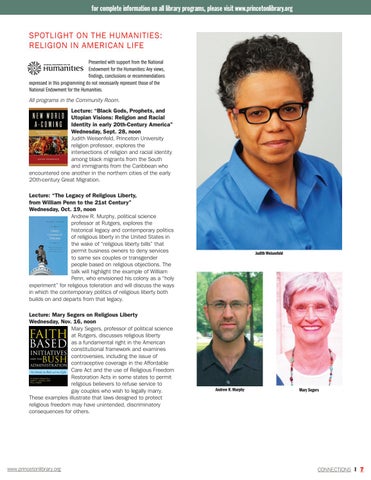 for complete information on all library programs, please visit www.princetonlibrary.org

SPOTLIGHT ON THE HUMANITIES: RELIGION IN AMERICAN LIFE Presented with support from the National Endowment for the Humanities: Any views, findings, conclusions or recommendations expressed in this programming do not necessarily represent those of the National Endowment for the Humanities. All programs in the Community Room. Lecture: “Black Gods, Prophets, and Utopian Visions: Religion and Racial Identity in early 20th-Century America” Wednesday, Sept. 28, noon Judith Weisenfeld, Princeton University religion professor, explores the intersections of religion and racial identity among black migrants from the South and immigrants from the Caribbean who encountered one another in the northern cities of the early 20th-century Great Migration. Lecture: “The Legacy of Religious Liberty, from William Penn to the 21st Century” Wednesday, Oct. 19, noon Andrew R. Murphy, political science professor at Rutgers, explores the historical legacy and contemporary politics of religious liberty in the United States in the wake of “religious liberty bills” that permit business owners to deny services to same sex couples or transgender people based on religious objections. The talk will highlight the example of William Penn, who envisioned his colony as a “holy experiment” for religious toleration and will discuss the ways in which the contemporary politics of religious liberty both builds on and departs from that legacy. Lecture: Mary Segers on Religious Liberty Wednesday, Nov. 16, noon Mary Segers, professor of political science at Rutgers, discusses religious liberty as a fundamental right in the American constitutional framework and examines controversies, including the issue of contraceptive coverage in the Affordable Care Act and the use of Religious Freedom Restoration Acts in some states to permit religious believers to refuse service to gay couples who wish to legally marry. These examples illustrate that laws designed to protect religious freedom may have unintended, discriminatory consequences for others.

The Princeton Public Library quarterly magazine features a preview of the Racial Literacy series, a profile of illustrator Greg Pizzoli and details of fall programming. 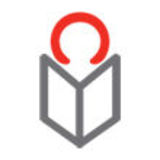