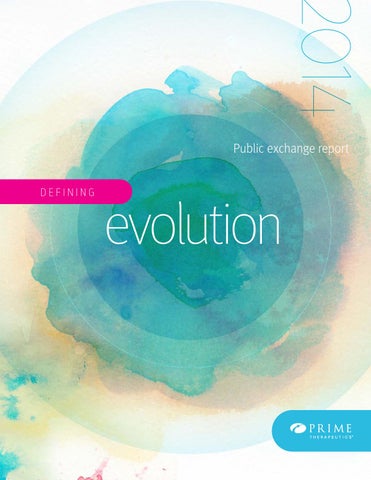 • This report looks closely at changes in drug costs, utilization and other key measures that affect pharmacy spending. Data from Jan. 1 – Dec. 31, 2014, is compared across Prime Therapeuticsʼ (Prime’s) public exchange and commercial members. Unless otherwise noted, all insights come from Prime’s analyses. • Pharmacy trend data represents more than 13 million unadjusted public exchange claims and more than 143 million unadjusted commercial claims processed in 2014. Claim counts are assigned based on daysʼ supply, and 90-day fills have been converted to carry the same weight as 30-day retail fills. • To calculate data within this report, we used an average membership for both the public exchange and commercial populations. KEY TERMS Public exchange members: people enrolled in a public health insurance exchange plan with pharmacy benefits

provided by Prime Commercial members: people enrolled in health insurance plans provided by an employer or other organization

with pharmacy benefits provided by Prime (excluding Medicare and Medicaid) Unadjusted claims: any pharmacy claim filled, no matter the length of the supply, is counted as one claim Adjusted claims: claim counts are attributed to the days’ supply, with one prescription counted for every

30 days of supply (e.g., if claim is for 90-day supply, it would be counted as three prescriptions) Specialty: all drugs managed through our specialty pharmacy program Traditional: all drugs not on our specialty drug management list Total drug spend: combined spend for drugs covered under the pharmacy benefit

Definitions matter: Specialty drugs All pharmacy benefit managers (PBMs) face the same challenges: high costs, steep inflation and rising use. But not all PBMs measure these challenges in the same way. This is particularly true of specialty drugs. There

A NOTE ON THE NUMBERS

is no single definition of “specialty.” In the past, many commonly used and low-cost drugs were excluded from specialty classifications. Today, these drugs are frequently being included, a redefinition that can make specialty drug spend appear lower. Given the extreme variability of specialty drug costs, the definition truly makes a difference.

We’re proud of our success in this

Beyond those basic numbers, this

new market. And proud to have

comparisons of these two groups,

many previously uninsured, get

the medicine they need to feel

better and live well. As of today, we are now serving 1.95 million public exchange members. Prime — like others in the industry — entered the first year

of public health exchanges with

We don’t know what the future

holds. But with a full year of

Given the infancy of this market,

we were unsure how many people

us, we’re also providing our

would enroll for coverage through

perspective on the legal

our Blue Cross and Blue Shield

and market trends that will likely

what their health status would

be, or what level of coverage

In the meantime, we’re

We anticipated that public

excited about serving our

exchange members would be

older and have more health

together with our Blue Plan

care needs than our commercial

members. This report, based on the first full year of data, confirms those initial expectations. Prime’s public exchange members were, on average, eight years older, more likely to be women and had a per member per month

than our commercial members.

Prime served 1 in every 6 people who enrolled in health coverage through public health exchanges in 2014.

The introduction of public health care exchanges has ushered in a new type of health care consumer. As we analyzed this population’s demographics, medicine use and drug spend in 2014 compared to our commercial membership — and reflected on what the future may bring — we uncovered several key findings.

public exchange Older and predominantly female Primeâ&#x20AC;&#x2122;s 2014 public exchange population was 56.1 percent female and had an average age of 42.6 years.

Understanding of health benefits continues to evolve In 2014, almost 3 out of 4 public exchange members chose silver plans. As this population gets healthier and becomes more educated on their options, catastrophic and bronze plans are quickly gaining popularity.

Growing in numbers — for now On par with national growth, Prime saw a public exchange membership enrollment spike of 41 percent for the 2015 plan year.

In 2014, health reform introduced the public exchanges. With this, a new member demographic emerged in the health insurance marketplace.

A higher percentage of exchange members were between 45 and 64 years old, pushing the average age higher than Prime’s commercial membership.

Prime’s findings are similar to the national average, which found that 28 percent of individuals who selected a health insurance plan in the public marketplace were 18–34 years of age.1

Primeâ&#x20AC;&#x2122;s silver-plan enrollment level was similar to the national average of 65%.2

Members enrolled through the public exchanges had distinctly different health plans from our commercial population. Notably, the types of health plans they could select were regulated. As outlined in the Affordable Care Act (ACA), there were five basic types of qualified health plans available.

*Available only to people who are under 30 years old or have a hardship exemption.1

Specialty spend as a percent of overall spend

90-day supply utilization as a percent of overall claims

Member spend (out-of-pocket) as a percent of overall spend

Specialty drug spend was 16.4 percent higher for our public exchange membership than our commercial membership due to greater use of high-cost drugs.

by spend. We found that hepatitis C and HIV drugs accounted for five of the

drugs by spend for

categories, we analyzed the top drugs

Five of the top 10 public exchange

In addition to analyzing the top drug

Read an in-depth analysis on page 20.

Utilization differences Utilization, the use of drugs, grew quarter over quarter in 2014 for both our commercial and public exchange memberships. And both populations overwhelmingly filled 30-day supplies at retail pharmacies. But public exchange members filled more prescriptions, with an annual average of 11.7 per member (versus 10.3 for commercial members). How members got their medicines filled varied greatly. Public exchange members were 37 percent less likely to use home delivery. But they used our extended supply network (ESN) more than twice as often as commercial members. Home delivery and ESN utilization stayed fairly consistent quarter over quarter.

of traditional drugs in nine categories.* +12.2%

Specialty as a percent of overall claims

Home delivery as a percent of overall claims

ESN as a percent of overall claims

*Utilization as a percent of total claims

Specialty drugs accounted for just 0.43% of claims for our public exchange members, but they made up 28.6% of the overall drug spend.

Just 0.7 percent of exchange members are living with hepatitis C or HIV. But the impact on spend is huge. Utilization and spend for hepatitis C and HIV treatments were some of the most significant differences between our public exchange and commercial membership.

big cost implications What does 0.7% look like? This small circle, when compared to the large green circle.

our commercial members. Nearly $1 out of every $5 spent on drugs for public exchange

members was spent to treat hepatitis C or HIV. For our public exchange membership, hepatitis C and HIV both ranked within the top three categories for spend. For commercial members, neither even appears in the top 10.

For public exchange members, hepatitis C drugs account for just 0.1 percent of all claims, but make up 9.94 percent of total spend. This is largely driven by high-cost drugs such as Sovaldi, Harvoni and Olysio. HIV drugs made

In 2015, we saw a flood of new competition as more insurers offered plans through the health insurance marketplace. Despite the increased competition, our public exchange membership continued to grow.

Through our unique connections

with our Blue Plan owners and

As we continue to serve the growing public exchange

clients, we saw a 41 percent

stabilize. In 2014, we saw heavy use of prescriptions

increase in our public exchange

population, we predict their health, as a whole, will for severe, chronic conditions such as hepatitis C and HIV. This is largely due to an underserved population

who may not have previously qualified to buy insurance

treatment, their health should improve and plan costs

membership to more than

due to their conditions. As these people receive should decline. Additionally, as more employers shift of individuals will be enrolling. These new, healthier individuals would reduce the prevalence of serious medical conditions, increasing the future viability of the state and federal public exchanges.

In the first year of public health exchange purchasing,

From our data, we know that many of these people

U.S. Supreme Court. The law has been highly debated

since its passage in 2010. This year, the validity of

As their health care needs level out, more people are

some of the language within the law will be debated.

selecting catastrophic and bronze plans. This would

The legality of the premium tax credit subsidies offered

to qualifying individuals is at stake. Should these

members are identifying another opportunity to

subsidies no longer be available, we expect substantial

save through lower premiums. Thus far, our 2015

disenrollment among the subsidized population.

enrollment has shown a 135 percent increase in

catastrophic plans and a 70 percent increase in bronze plans.

and subsidies for qualified individuals. If the law is struck down, it could mean many people needing coverage would no longer be able to afford it. As we’ve seen from our utilization data, our benefits are helping people with very serious conditions get treatment. Without an immediate contingency plan, this defeat

Tom Hoffman Vice President and General Manager, Individual Market “Our work with industry partners, other PBMs, and the Centers for Medicare and Medicaid Services has helped align

would result in thousands of sick people no longer being able to pay for the insurance and medicines they need. If the subsidies are defeated, it’s critical for policymakers to work quickly to create a national alternative exchange or new state-based exchanges so people in need can continue to receive subsidies that help them pay for care.

ACA regulations with many unique aspects of pharmacy benefits. This spirit of collaboration has led to positive outcomes and a better member experience across all public exchange plans.”

in summary We expect 2015 to be yet another important year of evolution for the public health exchanges. This evolution will undoubtedly lead to more transformation and adjustments as we look to 2016 and beyond. This is Prime’s first full-year report analyzing spend, utilization and trends for our public exchange membership. Moving forward, we will gain additional insight into this population. And that knowledge will allow us to continue working together with our Blue Plan owners and clients to help people get the medicine they need to feel better and live well. 24

About Prime Therapeutics Prime helps people get the medicine they need to feel better and live well. The company manages pharmacy benefits for health plans, employers, and government programs including Medicare and Medicaid. Prime processes claims and delivers medicine to members, offering clinical services for people with complex medical conditions. Headquartered in St.Â Paul, Minn., Prime serves more than 26 million people. It is collectively owned by 13 Blue Cross and Blue Shield Plans, subsidiaries or affiliates of those plans. Prime has been recognized as one of the fastest-growing companies in the nation. For more information, visit PrimeTherapeutics.com or follow @Prime_PBM on Twitter.

All brand names are the property of their respective owner.