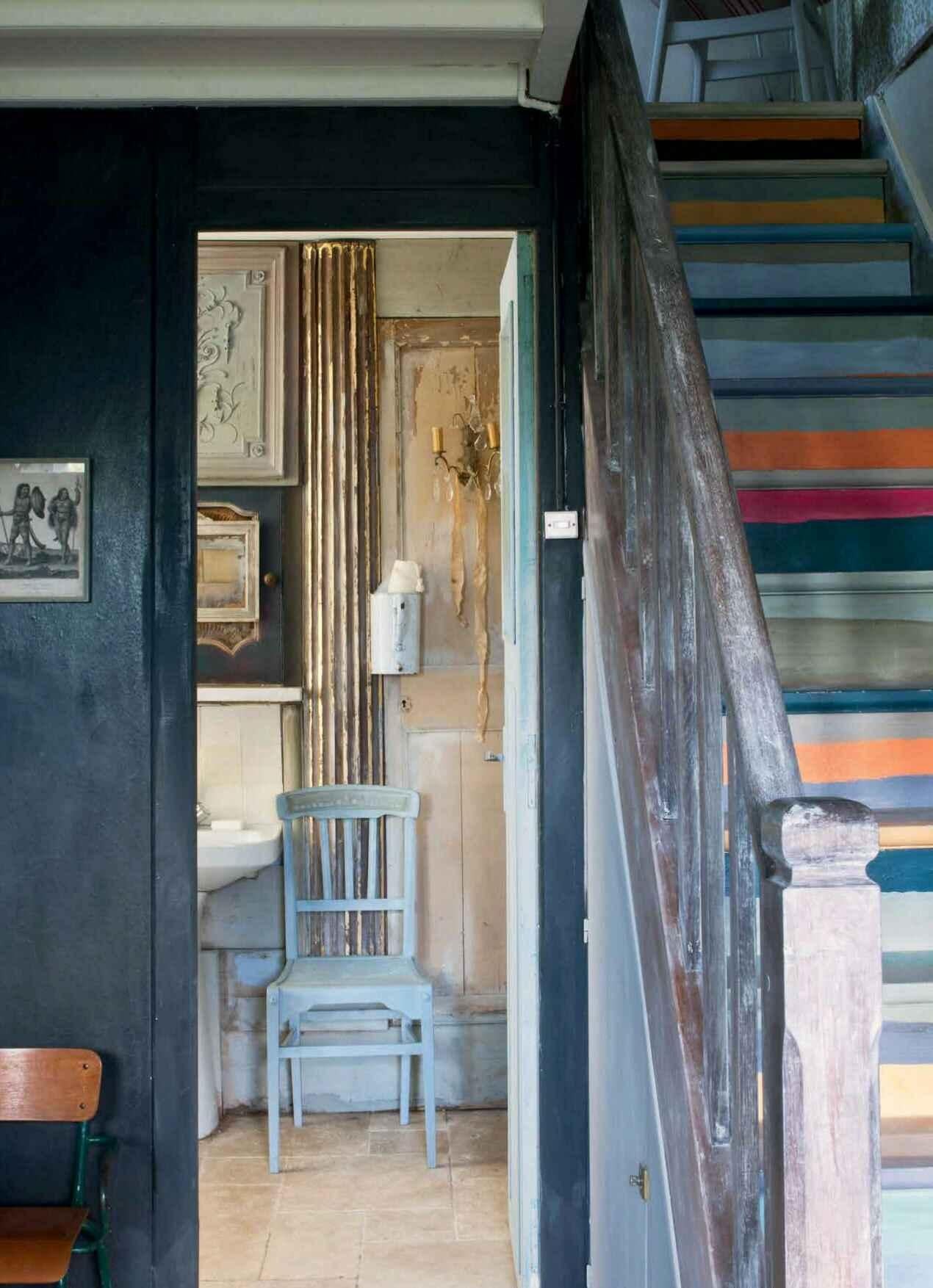 GONE TROPPO New Plymouth, with its proximity to Mt Taranaki, isn’t known for its balmy climate in the cooler months, but Michael can be found in one of his warm glasshouses most mornings during winter.

INTO THE BLUE The walls in the living area are painted in stark, dramatic Resene Coast, which work as the perfect backdrop for Michael’s art and plant collection.

“I was nervous about taking it on, but my friends and family said, ‘You’ll love it,’ and now I feel so grateful we’ve got it.”

If you’re looking for Michael Mansvelt, you might fi nd him under a palm tree surrounded by tropical and sub-tropical foliage and vibrant-coloured blooms. And no, he won’t be in some Far North hotspot or island idyll. His “happy place” is on the outskirts of New Plymouth. It’s here in one of his hothouses that he relaxes with a morning coffee, holds staff meetings and hosts mammoth dinner parties.

“Sometimes I work there, especially in the winter months,” says the owner of Michael Mansvelt Design, an award-winning landscape, interior and architectural design practice specialising in top-end projects. “The moment the sun comes up, it starts to warm up. Taranaki isn’t the warmest province – I feel

I was born for a warmer climate.”

The hothouse is a 30- or 40-second walk from the back door of Michael’s house, a four-bedroom, turn-of-the-century villa on half a hectare of land.

The story of how he ended up in a former garden centre, started when he noticed the property had been sitting on the market for a while, so he decided to check it out. “There were lovely trees on the approach – puriri and a giant copper beech – I thought it was a sign. There were some nice character features in the house, but it was unrenovated. I love villas, but I don’t love villas with aluminium windows,” he says. “I saw it would be a lot of work, but had a lot of potential.”

He bought the property – complete with four hothouses and the villa, which had been moved to the site in the 1980s – just before the fi rst lockdown last year.

Up until then, he’d had his offi ce, home and plant nursery on different sites in

New Plymouth, so despite the challenges of the Waiwhakaiho site, it offered him the opportunity to consolidate.

LIVING ROOM Michael’s cushions are from Plantation Design Store, which is owned by his ex-wife Alisha Barnes. The tan couch is crocodile leather and the coff ee table was an antique shop find in Sanson.

“It’s just incredible; I was nervous about taking it on but my friends and family said, ‘You’ll love it,’ and now I feel so grateful we’ve got it. It’s been the best thing for the business; now I can develop the planting.”

Michael’s currently in a ‘collecting phase’. “I’ve got a lot of plants to grow and propagate.” By cultivating his own, he says, he can save thousands of dollars each year.

Lock down those plans

Last year’s fi rst lockdown was challenging, but it also had its blessings. “It was a great opportunity to get my head around how the nursery would work, the irrigation.” Having an unrenovated property also gave him a freedom he was unaccustomed to. “Every house I’ve bought, I’ve renovated. Then the kids come in, followed by the dogs (doberman Pluto and Jack Russell-cross, Casper) and things get broken. I’m loving not having the pressure.”

Michael has four children, aged between 10 and 19, and the two eldest, Flynn and Felix live with him. During lockdown, they hunkered down at the old garden centre, while his youngest two were with their mum, Alisha Barnes. She’s the owner of Plantation Design Store in New Plymouth, general manager of Michael Mansvelt Design and his former wife.

Michael insists the villa is unrenovated, but you’d be hard pressed to describe it that way if you’d seen the lounge and dining areas. Rich blue and pale walls are perfect backdrops for his art and, as you’d expect, plants. “When you’ve got a lot of white trim, you can’t lose,” he says of the blue paint, Resene Coast. The picture of the white dog is by Reuben Paterson, the wall hanging in the dining room is by Kay George, the bright ceramic piece is by Christine McLean and the wooden stag’s head was a Father’s Day present. The tall African milk tree behind the crocodile leather couch was left when Michael took possession of the property. “They’re as tough as old boots,” he says.

Michael has big plans for the property, which also has a garage

LIGHTEN UP As a counterpoint to the dark walls and floors, Michael says, “When you’ve got a lot of white trim, you can’t lose.” The tall palm pictured in front is underplanted with begonias.

that has been converted into a recording studio by eldest son, Flynn (aka Jeremiah the Nine, on Spotify).

The semi-rural property, he says, is ideal for Michael’s sons and their friends. “When you’ve got two teenage boys, you’ve got eight teenage boys,” he says. “They’re in a safe place; they can be a bit rowdy. I’m happy having them around and I love feeding them.”

One of his non-negotiables in the renvovation is a “dream kitchen”, which he says, will be traditonal Shaker-style. It will look like it’s been there for a century, but will have all the mod cons.

In terms of the indoor-outdoor fl ow, “I’d like to turn it into a Queenslander with verandas all around — the garden is most important to me. The fi rst thing I did in lockdown was plant a load of plants.” Michael put in fruit trees, fl owers and more. “I’m really into fragrance, I’m a sucker for any plant with a fragrant fl ower.”

Michael trained as a landscape designer, but from a young age was always fascinated by homes: “I was adopted and the real common ground [with my family] was a love of houses.” He grew up in the south Taranaki town of Hāwera where he says, thanks to money from the local wool industry, there were many beautiful examples. “My friends had mid-century houses and California bungalows, and as a kid I was designing houses.”

That interest never waned and many years later when a friend said he wanted to build a seafront property, but hadn’t found the right design or designer, Michael was all in. “I said, ‘I know what sort of house you should design and I drew the house on a napkin in a cafe.” The result: a mid-century-style, fl at-roof house that launched his

“The garden is most important to me. The fi rst thing I did in lockdown was plant a load of plants.”

home-designing career – and a buzz around town. Not that it was a straightforward transition. “It was a real learning curve for me, learning about the engineering side of things.”

His favourite designers include revolutionary Brazilian architect Oscar Niemeyer, who helped design his country’s new capital Brasilia in the 1950s, and compatriot Roberto Burle Marx, a landscape architect who worked with him and who is responsible for landmarks including the promenade at Copacabana Beach.

His own interior design philosopy is one of “timelessness” and involves natural materials. “Look at the past – the designs that have lasted.” He says he’s never sought to be “on trend”. “I’ve always been a fan of buying antiques and Persian rugs.” He’s also attracted to colour and not afraid to use it. His strengths? Using existing materials to their best effect.

In one commercial interior design assignment, the architect wanted to get rid of all the wood and start again but Michael decided to go with the grain and a sophisticated, woody design was the result. “My whole philosophy is to look at what you’ve got and think outside the square.”

Based in Taranaki, Michael’s work takes him all over New Zealand. Te Arai Lodge, near Mangawhai, featured on Grand Designs New Zealand and he’s currently working on a beautiful garden in Greytown in the Wairarapa. A couple engaged him to design their houses in Taupō and Opua in the Bay of Islands, and he’s completed projects in Cambridge, Hamilton, Whanganui and Auckland. He also appeared in TV shows Mucking In and Back to Basics.

When Michael says he’s in a good space, he’s not just talking about his property. Although he’s divorced from Alisha, he recently approached her to work with him again. “I said to her, ‘Why don’t you help me out? We’ve got four kids together. It benefi ts me; it benefi ts her. And when you’ve been married for 18 years… well, she knows how to manage me and that’s what I need.”

He’s also fi nding joy in sharing his designing, landscaping and plant expertise with his staff. “One thing I’m loving is working with these young people and instilling a passion in them; it’s like watching a a seed grow,” he says. “Plants are so good for us. I can defi nitely testify to that.”

+ We are so much happier when our outlook is green, so using plants to create that is a vitally important part of the human experience. + There is the right plant or tree for every space. Select plants that hide fence lines and buildings without outgrowing their space. This way the plantings are more likely to be kept long term and the gardener is leaving behind a legacy that can be enjoyed by future generations. + Put in plants that attract our native birds and provide fragrance, shade and fruit to eat. These add other dimensions to our gardens and enjoyment of outdoor spaces.

+ I’m a really big fan of using antiques and quality pieces of all styles from many eras. + Avoid buying too many on-trend items, as they can date quickly and look like they need replacing when that trend is out of style.