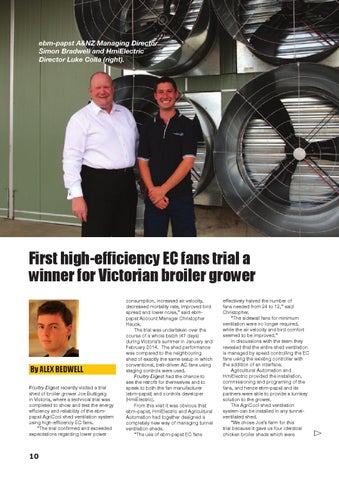 By ALEX BEDWELL Poultry Digest recently visited a trial shed of broiler grower Joe Buttigeig in Victoria, where a technical trial was completed to show and test the energy efficiency and reliability of the ebmpapst AgriCool shed ventilation system using high-efficiency EC fans. “The trial confirmed and exceeded expectations regarding lower power

consumption, increased air velocity, decreased mortality rate, improved bird spread and lower noise,” said ebmpapst Account Manager Christopher Hauck. The trial was undertaken over the course of a whole batch (47 days) during Victoria’s summer in January and February 2014. The shed performance was compared to the neighbouring shed of exactly the same setup in which conventional, belt-driven AC fans using staging controls were used. Poultry Digest had the chance to see the retrofit for themselves and to speak to both the fan manufacturer (ebm-papst) and controls developer (HmiElectric). From this visit it was obvious that ebm-papst, HmiElectric and Agricultural Automation had together designed a completely new way of managing tunnel ventilation sheds. “The use of ebm-papst EC fans

effectively halved the number of fans needed from 24 to 12,” said Christopher. “The sidewall fans for minimum ventilation were no longer required, while the air velocity and bird comfort seemed to be improved.” In discussions with the team they revealed that the entire shed ventilation is managed by speed controlling the EC fans using the existing controller with the addition of an interface. Agricultural Automation and HmiElectric provided the installation, commissioning and programing of the fans, and hence ebm-papst and its partners were able to provide a turnkey solution to the grower. The AgriCool shed ventilation system can be installed in any tunnelventilated shed. “We chose Joe’s farm for this trial because it gave us four identical chicken broiler sheds which were