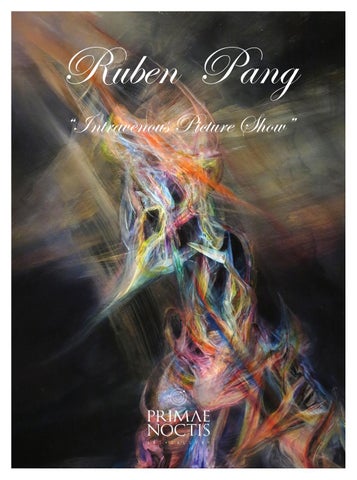 Picture this. A child turns to his parents and says, “I want to go see a movie.” Let us pretend Mother and Father are not too busy this weekend and they take the boy to a picture show. The family sit in relative silence as giant mutated lizards battle the machine architecture of the city. Monster trucks throw bodies onto a Los Angeles boulevard. A slow-motion shot of a shattering Japanese tea house. A sedately toppling London Eye. Hong Kong traffic. An Italian summer passing in wide-angle hyperlapse. A close-up of a boy, much like the child watching this movie, held by his robot mother in high-definition tenderness. The child sitting safely in his theatre seat absorbs images so rapidly occurring: Of culture, geography, iconography, relationships, accents... The child sees and learns nothing factual. But under the skin is everything mixing and talking to itself. Ruben Pang’s latest body of work, titled ‘Intravenous Picture Show’, is the product of an imagination overstimulated in the 21st Century. Like the child we have earlier pictured – or any contemporary viewer growing up in a violently mediated culture – Pang’s own imagination is overrun with characters, here fleshed out on aluminum sheets in florid acrylic, oil and alkyd. Pang (b. 1990) states, “I am obsessed with the malfunctioning mind and the brilliant mind. I don’t necessarily believe that genius must bring with it some sort of disability, although historically and statistically that’s the case. But transposing this correlation makes good compositions, good paintings. Forms are seen best in relativity. I can’t go into detail the steps I take in putting my mind into certain places, but I like this form of rewiring.” This statement from Pang does not imply that his work is made in a hallucinogenic state of mind, but rather that the function of memory is altered in the modern age through the onslaught of visual stimuli, which can produce a certain trauma. It is this altered function of memory which serves well enough for the purposes of his art. For Pang, contemporary memory and imagination is drenched with instantaneous and easily accessible information to the point of amnesia. This thunderstorm of information implies we no longer remember in detail and may be part blind to it in its deluge. Instead, we recall disjunct snippets – mostly emotive – that such stimuli impress on us. Pang attributes this way of memory in part to our modern reliance on technology. He quips, “You don’t have to remember how to get [to a place]. You just have to remember the street name. And a machine tells us the million ways to get there.” Indeed, one could say the speed and efficiency with which we work and live comes at the price of a lower capacity for detail and perhaps a sense of instability. However, rather than drawing attention to this lower capacity as a weakness, in this series Pang attempts to exploit the subconscious drift between still images retained in our consciousness.

Pang remarks, “These [paintings] are moments before something good or bad is going to happen but taken out of context. A beautiful glitch. A micro-expression. It’s not just fascinating but right. An apt way of painting. We are no longer making impressions but frames... without subtitles.” Of instantaneous access and overflowing feeds of information, Pang further notes, “It is harder to sift through what is common and what is popular. You are attracted to things you have affinity with and ownership is drawn... I am looking for stimulation.” The craving for stimulation then is a symptom of a contemporary world digitally enhanced and overwrought with exaggerated light, colour, and unexplainable affinities. This craving lies at the heart of the art presented in this series, which can be further broken down into three movements. The first movement consists of smaller paintings (60 X 70 cm) are made at a dimension Pang believes to be fortuitous. Pang notes wryly that these paintings are the same size as his bathroom mirror and thus the perfect dimensions for portraiture and reflective introspection. Of these works in particular, Pang says his process is akin to a coping mechanism against the amnesia earlier mentioned. In the act of painting, he attempts to transform brush strokes into muscle memory. Each piece becomes a reiteration of a struggle between composition and colour; physical and muscular in character. Pang remarks, “It’s almost like you’re carving someone’s head. It’s almost [either] violent or healing. Because the strokes you use to carve the skin off a fruit or to cut into flesh are almost the same movement as tracing the contour of someone’s jaw or stroking someone’s hair in consolation. I’m fascinated with the dual-aspect of neurosis. The sane and insane. The pleasurable and painful.” Through experience, Pang has found this bathroom mirror dimension to be a good platform to increase his mastery of the oil medium, particularly in illusions of transparency and subtle changes in facial expression. Drastic changes in composition can be made with relative ease due to the small size of this dimension. Paintings within this movement include Sunspots, Termite and Violet Invasion. The second movement contains slightly larger paintings that grow from forms Pang sees as the most stable and potent in terms of composition within portraiture – that of the crucifix and three-quarter head and torso. These postures are not utilized symbolically by the artist as much as for their firmness as frames on which to apply paint in the most volatile way possible. Paintings in these movement include The Sermon, My Fat Baby, and Flight Suit. The Sermon is chronologically the first painting made in this second movement. It depicts an abstract figure held up by a central pillar, the hands giving weight and grounding the figure to a sky both fluid and out of place. Pang explains, “It is an accumulation of the techniques honed in the smaller paintings in the sense that I have used these strokes before. This is me painting at my most comfortable in terms of technique. The torso has been hacked and slashed, yet [the figure] shows you as much surface of itself as possible. It is a dignified figure.” The Sermon is very much informed by Pang’s observation of contemporary visual effects and digital art, with its layered aesthetic as well as

Pang’s own guiding principles towards painting technique. It also an example of Pang’s enigmatic style of painting figures that have lost or severed limbs – a subject analogous to his opinion of contemporary viewership in increasingly digital formats. Pang comments, “[I]f you pause a movie while it’s buffering, you can see two completely different scenes superimposed onto one another. That becomes an almost natural way to remember things, layered and compiled in this way.” In the third movement, Pang begins to explore the interactions between multiple figures for the first time in his work. Paintings in this movement include Undertow, Scott’s Wings, and Faith Healer. These paintings can be seen as telepathic conversations between characters, between characters and their backgrounds, and between painting and viewer. The role of light is important in this movement and particular attention has been given to the environment in these paintings. Pang comments, “It’s like the sky is volatile. Ominous maybe, apocalyptic? But more dreamlike. Mysterious. It’s not serene but a kind of calm still reaches out to you. It’s definitely the kind of light I see in my dreams – saturated, exaggerated – but almost believable. Believable because it [aptly] supports the narrative in the dream. You know you’re in the real world when bad shit happens in good weather. Like a shootout on a beautiful day. In my paintings, the environment and the subject/characters are interdependent. Almost to the point where they will defy physics to merge into each other, to communicate. They have stories to tell each other.” The paintings in the second and third movement further herald a new direction in Pang’s work – that of clearer figurative subject matter – as if detail has been suddenly glimpsed in a murky buffer stream. Of particular note are the paintings My Fat Baby and Faith Healer. Even so, Pang retains the philosophy of his working method as an intense act of faith.

Of this practice of faith Pang notes, “I have to acknowledge that the way I paint is governed by a fanatical set of rules for what a painting must be. Every stroke must contribute to the final picture. Nothing can be allowed to be superfluous. And you must show [each brushstroke] will contribute by painting it in a way which is traansparent. If I do the background layer, it is never erased. Its ghost must show under what covers it.” Pang’s subject matter is also treated by a rigorous set of rules. Although dream-like, delusional or of a superstitious quality, Pang strives to make figures sit in chaotic environments. Of his subjects Pang says, “The characters must be perfectly comfortable in whatever absurd situation they are in. Only their skin is uncomfortable. They aren’t self-conscious either. They might be deformed or ugly or injured but they stand with a sort of dignity, almost as if showing off their scars.” One could say Pang’s picture show takes place within, spilling out onto his canvas – a series produced through intravenous feeling. It is after all, directly produced from reflection on the modern condition of plugging into and consuming media. Yet, the paintings in this series do not suggest passive viewership but rather invite the viewer to consider an active imagination in riot of the feeding drip. Pang’s goal is awaken a creative process within an otherwise bleak view of our consumption patterns. In his own way, this is a form of healing. The Sermon, 2014 oil and alkyd on aluminum composite panel, 99 x 77 cm

Organized by: After the residency between Italy and Switzerland, Ruben Pang and Stelva SA in collaboration with Primae Noctis Art Gallery, are pleased to present â&#x20AC;&#x153;Intravenous Pictures Showâ&#x20AC;?. The exhibition is featuring the artworks produced during the residency at Primae Noctis venue in Lugano. 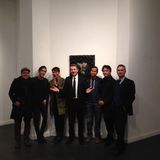