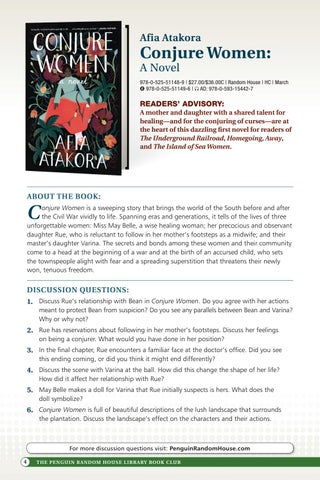 READERS’ ADVISORY: A mother and daughter with a shared talent for healing—and for the conjuring of curses—are at the heart of this dazzling first novel for readers of The Underground Railroad, Homegoing, Away, and The Island of Sea Women.

onjure Women is a sweeping story that brings the world of the South before and after the Civil War vividly to life. Spanning eras and generations, it tells of the lives of three unforgettable women: Miss May Belle, a wise healing woman; her precocious and observant daughter Rue, who is reluctant to follow in her mother’s footsteps as a midwife; and their master’s daughter Varina. The secrets and bonds among these women and their community come to a head at the beginning of a war and at the birth of an accursed child, who sets the townspeople alight with fear and a spreading superstition that threatens their newly won, tenuous freedom.

DISCUSSION QUESTIONS: 1. Discuss Rue’s relationship with Bean in Conjure Women. Do you agree with her actions meant to protect Bean from suspicion? Do you see any parallels between Bean and Varina? Why or why not?

2. Rue has reservations about following in her mother’s footsteps. Discuss her feelings on being a conjurer. What would you have done in her position?

3. In the final chapter, Rue encounters a familiar face at the doctor’s office. Did you see this ending coming, or did you think it might end differently?

4. Discuss the scene with Varina at the ball. How did this change the shape of her life? How did it affect her relationship with Rue?

5. May Belle makes a doll for Varina that Rue initially suspects is hers. What does the doll symbolize?

6. Conjure Women is full of beautiful descriptions of the lush landscape that surrounds the plantation. Discuss the landscape’s effect on the characters and their actions.