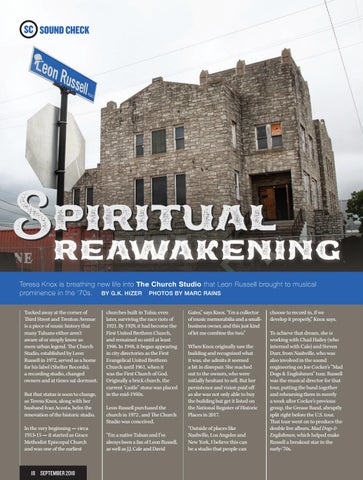 Teresa Knox is breathing new life into The Church Studio that Leon Russell brought to musical prominence in the ‘70s. BY G.K. HIZER PHOTOS BY MARC RAINS Tucked away at the corner of Third Street and Trenton Avenue is a piece of music history that many Tulsans either aren’t aware of or simply know as mere urban legend. The Church Studio, established by Leon Russell in 1972, served as a home for his label (Shelter Records), a recording studio, changed owners and at times sat dormant. But that status is soon to change, as Teresa Knox, along with her husband Ivan Acosta, helm the renovation of the historic studio. In the very beginning — circa 1913-15 — it started as Grace Methodist Episcopal Church and was one of the earliest

churches built in Tulsa; even later, surviving the race riots of 1921. By 1929, it had become the First United Brethren Church, and remained so until at least 1946. In 1948, it began appearing in city directories as the First Evangelical United Brethren Church until 1961, when it was the First Church of God. Originally a brick church, the current “castle” stone was placed in the mid-1950s. Leon Russell purchased the church in 1972 , and The Church Studio was conceived. “I’m a native Tulsan and I’ve always been a fan of Leon Russell, as well as J.J. Cale and David

Gates,” says Knox. “I’m a collector of music memorabilia and a smallbusiness owner, and this just kind of let me combine the two.” When Knox originally saw the building and recognized what it was, she admits it seemed a bit in disrepair. She reached out to the owners, who were initially hesitant to sell. But her persistence and vision paid off as she was not only able to buy the building but get it listed on the National Register of Historic Places in 2017. “Outside of places like Nashville, Los Angeles and New York, I believe this can be a studio that people can

choose to record in, if we develop it properly,” Knox says. To achieve that dream, she is working with Chad Hailey (who interned with Cale) and Steven Durr, from Nashville, who was also involved in the sound engineering on Joe Cocker’s “Mad Dogs & Englishmen” tour. Russell was the musical director for that tour, putting the band together and rehearsing them in merely a week after Cocker’s previous group, the Grease Band, abruptly split right before the U.S. tour. That tour went on to produce the double live album, Mad Dogs & Englishmen, which helped make Russell a breakout star in the early-‘70s.