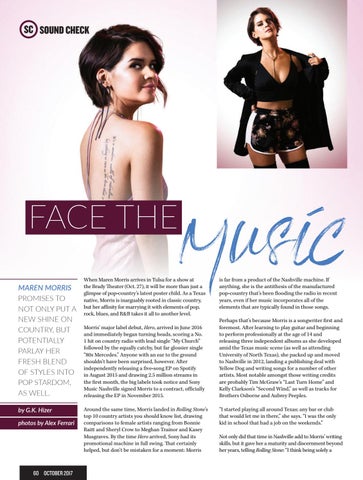 FACE THE MAREN MORRIS PROMISES TO NOT ONLY PUT A NEW SHINE ON COUNTRY, BUT POTENTIALLY PARLAY HER FRESH BLEND OF STYLES INTO POP STARDOM, AS WELL. by G.K. Hizer photos by Alex Ferrari

When Maren Morris arrives in Tulsa for a show at the Brady Theater (Oct. 27), it will be more than just a glimpse of pop-country’s latest poster child. As a Texas native, Morris is inarguably rooted in classic country, but her affinity for marrying it with elements of pop, rock, blues, and R&B takes it all to another level. Morris’ major label debut, Hero, arrived in June 2016 and immediately began turning heads, scoring a No. 1 hit on country radio with lead single “My Church” followed by the equally catchy, but far glossier single “80s Mercedes.” Anyone with an ear to the ground shouldn’t have been surprised, however. After independently releasing a five-song EP on Spotify in August 2015 and drawing 2.5 million streams in the first month, the big labels took notice and Sony Music Nashville signed Morris to a contract, officially releasing the EP in November 2015.

Around the same time, Morris landed in Rolling Stone’s top 10 country artists you should know list, drawing comparisons to female artists ranging from Bonnie Raitt and Sheryl Crow to Meghan Trainor and Kasey Musgraves. By the time Hero arrived, Sony had its promotional machine in full swing. That certainly helped, but don’t be mistaken for a moment: Morris

is far from a product of the Nashville machine. If anything, she is the antithesis of the manufactured pop-country that’s been flooding the radio in recent years, even if her music incorporates all of the elements that are typically found in those songs.

Perhaps that’s because Morris is a songwriter first and foremost. After learning to play guitar and beginning to perform professionally at the age of 14 and releasing three independent albums as she developed amid the Texas music scene (as well as attending University of North Texas), she packed up and moved to Nashville in 2012, landing a publishing deal with Yellow Dog and writing songs for a number of other artists. Most notable amongst those writing credits are probably Tim McGraw’s “Last Turn Home” and Kelly Clarkson’s “Second Wind,” as well as tracks for Brothers Osborne and Aubrey Peeples. “I started playing all around Texas; any bar or club that would let me in there,” she says. “I was the only kid in school that had a job on the weekends.” Not only did that time in Nashville add to Morris’ writing skills, but it gave her a maturity and discernment beyond her years, telling Rolling Stone: “I think being solely a