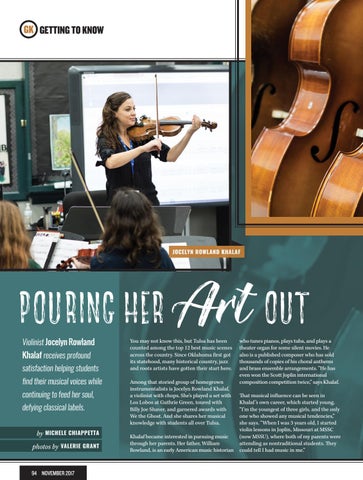 You may not know this, but Tulsa has been counted among the top 12 best music scenes across the country. Since Oklahoma first got its statehood, many historical country, jazz and roots artists have gotten their start here. Among that storied group of homegrown instrumentalists is Jocelyn Rowland Khalaf, a violinist with chops. She’s played a set with Los Lobos at Guthrie Green, toured with Billy Joe Shaver, and garnered awards with We the Ghost. And she shares her musical knowledge with students all over Tulsa.

Khalaf became interested in pursuing music through her parents. Her father, William Rowland, is an early American music historian

who tunes pianos, plays tuba, and plays a theater organ for some silent movies. He also is a published composer who has sold thousands of copies of his choral anthems and brass ensemble arrangements. “He has even won the Scott Joplin international composition competition twice,” says Khalaf. That musical influence can be seen in Khalaf ’s own career, which started young. “I’m the youngest of three girls, and the only one who showed any musical tendencies,” she says. “When I was 3 years old, I started violin lessons in Joplin, Missouri at MSSC (now MSSU), where both of my parents were attending as nontraditional students. They could tell I had music in me.”