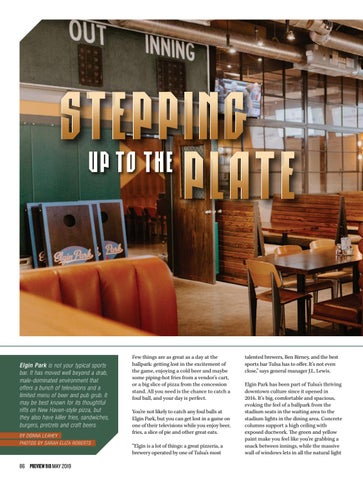 Elgin Park is not your typical sports bar. It has moved well beyond a drab, male-dominated environment that offers a bunch of televisions and a limited menu of beer and pub grub. It may be best known for its thoughtful riffs on New Haven-style pizza, but they also have killer fries, sandwiches, burgers, pretzels and craft beers. BY DONNA LEAHEY PHOTOS BY SARAH ELIZA ROBERTS

Few things are as great as a day at the ballpark: getting lost in the excitement of the game, enjoying a cold beer and maybe some piping-hot fries from a vendor’s cart, or a big slice of pizza from the concession stand. All you need is the chance to catch a foul ball, and your day is perfect. You’re not likely to catch any foul balls at Elgin Park, but you can get lost in a game on one of their televisions while you enjoy beer, fries, a slice of pie and other great eats. “Elgin is a lot of things: a great pizzeria, a brewery operated by one of Tulsa’s most

talented brewers, Ben Birney, and the best sports bar Tulsa has to offer. It’s not even close,” says general manager J.L. Lewis. Elgin Park has been part of Tulsa’s thriving downtown culture since it opened in 2016. It’s big, comfortable and spacious, evoking the feel of a ballpark from the stadium seats in the waiting area to the stadium lights in the dining area. Concrete columns support a high ceiling with exposed ductwork. The green and yellow paint make you feel like you’re grabbing a snack between innings, while the massive wall of windows lets in all the natural light