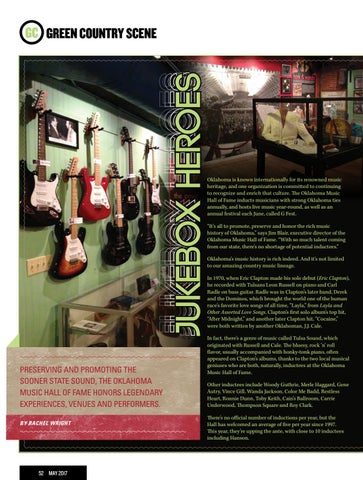 Oklahoma is known internationally for its renowned music heritage, and one organization is committed to continuing to recognize and enrich that culture. The Oklahoma Music Hall of Fame inducts musicians with strong Oklahoma ties annually, and hosts live music year-round, as well as an annual festival each June, called G Fest. “It’s all to promote, preserve and honor the rich music history of Oklahoma,” says Jim Blair, executive director of the Oklahoma Music Hall of Fame. “With so much talent coming from our state, there’s no shortage of potential inductees.” Oklahoma’s music history is rich indeed. And it’s not limited to our amazing country music lineage. In 1970, when Eric Clapton made his solo debut (Eric Clapton), he recorded with Tulsans Leon Russell on piano and Carl Radle on bass guitar. Radle was in Clapton’s later band, Derek and the Dominos, which brought the world one of the human race’s favorite love songs of all time, “Layla,” from Layla and Other Assorted Love Songs. Clapton’s first solo album’s top hit, “After Midnight,” and another later Clapton hit, “Cocaine,” were both written by another Oklahoman, J.J. Cale.

In fact, there’s a genre of music called Tulsa Sound, which originated with Russell and Cale. The bluesy, rock ‘n’ roll flavor, usually accompanied with honky-tonk piano, often appeared on Clapton’s albums, thanks to the two local musical geniuses who are both, naturally, inductees at the Oklahoma Music Hall of Fame. Other inductees include Woody Guthrie, Merle Haggard, Gene Autry, Vince Gill, Wanda Jackson, Color Me Badd, Restless Heart, Ronnie Dunn, Toby Keith, Cain’s Ballroom, Carrie Underwood, Thompson Square and Roy Clark. There’s no official number of inductions per year, but the Hall has welcomed an average of five per year since 1997. This year, they’re upping the ante, with close to 10 inductees including Hanson.

For over 30 years, Preview has been the best resource for discovering Green Country and locating the perfect place to eat, drink, visit, sho...

For over 30 years, Preview has been the best resource for discovering Green Country and locating the perfect place to eat, drink, visit, sho...