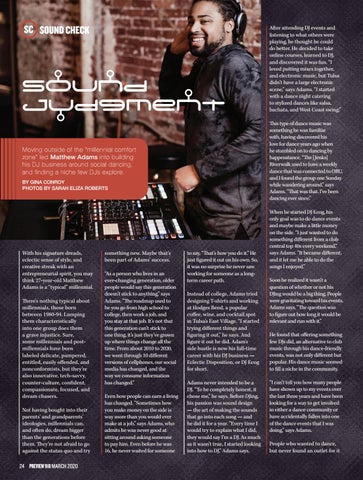 With his signature dreads, eclectic sense of style, and creative streak with an entrepreneurial spirit, you may think 27-year-old Matthew Adams is a “typical” millennial. There’s nothing typical about millennials, those born between 1980-94. Lumping them characteristically into one group does them a grave injustice. Sure, some millennials and postmillennials have been labeled delicate, pampered, entitled, easily offended, and nonconformists, but they’re also innovative, tech-savvy, counter-culture, confident, compassionate, focused, and dream chasers. Not having bought into their parents’ and grandparents’ ideologies, millennials can, and often do, dream bigger than the generations before them. They’re not afraid to go against the status quo and try

something new. Maybe that’s been part of Adams’ success. “As a person who lives in an ever-changing generation, older people would say this generation doesn’t stick to anything,” says Adams. “The roadmap used to be you go from high school to college, then work a job, and you stay at that job. It’s not that this generation can’t stick to one thing, it’s just they’ve grown up where things change all the time. From about 2010 to 2020, we went through 10 different versions of cellphones, our social media has changed, and the way we consume information has changed.” Even how people can earn a living has changed. “Sometimes how you make money on the side is way more than you would ever make at a job,” says Adams, who admits he was never good at sitting around asking someone to pay him. Even before he was 16, he never waited for someone

to say, “That’s how you do it.” He just figured it out on his own. So, it was no surprise he never saw working for someone as a longterm career path. Instead of college, Adams tried designing T-shirts and working at Hodges Bend, a popular coffee, wine, and cocktail spot in Tulsa’s East Village. “I started trying different things and figuring it out,” he says. And figure it out he did. Adam’s side hustle is now his full-time career with his DJ business — Eclectic Disposition, or DJ Ecog for short. Adams never intended to be a DJ. “To be completely honest, it chose me,” he says. Before DJing, his passion was sound design — the art of making the sounds that go into each song — and he did it for a year. “Every time I would try to explain what I did, they would say I’m a DJ. As much as it wasn’t true, I started looking into how to DJ,” Adams says.

After attending DJ events and listening to what others were playing, he thought he could do better. He decided to take online courses, learned to DJ, and discovered it was fun. “I loved putting mixes together, and electronic music, but Tulsa didn’t have a large electronic scene,” says Adams. “I started with a dance night catering to stylized dances like salsa, bachata, and West Coast swing.” This type of dance music was something he was familiar with, having discovered his love for dance years ago when he stumbled on to dancing by happenstance. “The [Jenks] Riverwalk used to have a weekly dance that was connected to ORU, and I found the group one Sunday while wandering around,” says Adams. “That was that. I’ve been dancing ever since.” When he started DJ Ecog, his only goal was to do dance events and maybe make a little money on the side. “I just wanted to do something different from a club central top 40s every weekend,” says Adams. “It became different, and it let me be able to do the songs I enjoyed.” Soon he realized it wasn’t a question of whether or not his DJing would be a big thing. People were gravitating toward his events. Adams says, “The question was to figure out how long it would be relevant and run with it.” He found that offering something few DJs did, an alternative to club music through his dance-friendly events, was not only different but popular. His dance music seemed to fill a niche in the community. “I can’t tell you how many people have shown up to my events over the last three years and have been looking for a way to get involved in either a dance community or have accidentally fallen into one of the dance events that I was doing,” says Adams. People who wanted to dance, but never found an outlet for it