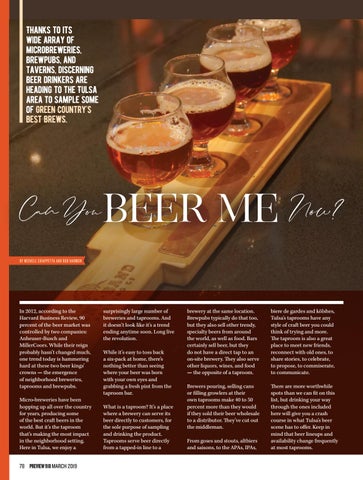 Thanks to its wide array of microbreweries, brewpubs, and taverns, discerning beer drinkers are heading to the Tulsa area to sample some of Green Country's best brews.

Can You BY MICHELE CHIAPPETTA AND ROB HARMON

In 2012, according to the Harvard Business Review, 90 percent of the beer market was controlled by two companies: Anheuser-Busch and MillerCoors. While their reign probably hasn’t changed much, one trend today is hammering hard at these two beer kings’ crowns — the emergence of neighborhood breweries, taprooms and brewpubs. Micro-breweries have been hopping up all over the country for years, producing some of the best craft beers in the world. But it’s the taproom that’s making the most impact in the neighborhood setting. Here in Tulsa, we enjoy a

surprisingly large number of breweries and taprooms. And it doesn’t look like it’s a trend ending anytime soon. Long live the revolution. While it’s easy to toss back a six-pack at home, there’s nothing better than seeing where your beer was born with your own eyes and grabbing a fresh pint from the taproom bar. What is a taproom? It’s a place where a brewery can serve its beer directly to customers, for the sole purpose of sampling and drinking the product. Taprooms serve beer directly from a tapped-in line to a

brewery at the same location. Brewpubs typically do that too, but they also sell other trendy, specialty beers from around the world, as well as food. Bars certainly sell beer, but they do not have a direct tap to an on-site brewery. They also serve other liquors, wines, and food — the opposite of a taproom.

biere de gardes and kölshes, Tulsa’s taprooms have any style of craft beer you could think of trying and more. The taproom is also a great place to meet new friends, reconnect with old ones, to share stories, to celebrate, to propose, to commiserate, to communicate.

Brewers pouring, selling cans or filling growlers at their own taprooms make 40 to 50 percent more than they would if they sold their beer wholesale to a distributor. They’ve cut out the middleman.

There are more worthwhile spots than we can fit on this list, but drinking your way through the ones included here will give you a crash course in what Tulsa’s beer scene has to offer. Keep in mind that beer lineups and availability change frequently at most taprooms.

From goses and stouts, altbiers and saisons, to the APAs, IPAs,