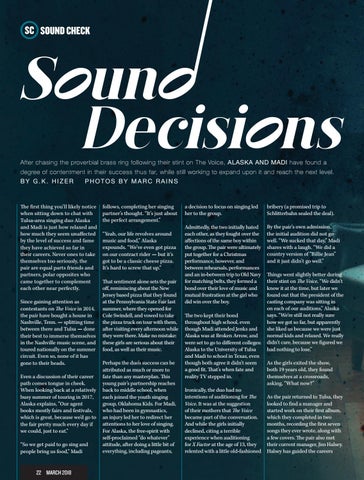 After chasing the proverbial brass ring following their stint on The Voice, ALASKA AND MADI have found a

degree of contentment in their success thus far, while still working to expand upon it and reach the next level. BY G.K. HIZER

The first thing you’ll likely notice when sitting down to chat with Tulsa-area singing duo Alaska and Madi is just how relaxed and how much they seem unaffected by the level of success and fame they have achieved so far in their careers. Never ones to take themselves too seriously, the pair are equal parts friends and partners, polar opposites who came together to complement each other near perfectly. Since gaining attention as contestants on The Voice in 2014, the pair have bought a house in Nashville, Tenn. — splitting time between there and Tulsa — done their best to immerse themselves in the Nashville music scene, and toured nationally on the summer circuit. Even so, none of it has gone to their heads. Even a discussion of their career path comes tongue in cheek. When looking back at a relatively busy summer of touring in 2017, Alaska explains, “Our agent books mostly fairs and festivals, which is great, because we’d go to the fair pretty much every day if we could, just to eat.” “So we get paid to go sing and people bring us food,” Madi

follows, completing her singing partner’s thought. “It’s just about the perfect arrangement.” “Yeah, our life revolves around music and food,” Alaska expounds. “We’ve even got pizza on our contract rider — but it’s got to be a classic cheese pizza. It’s hard to screw that up.” That sentiment alone sets the pair off, reminiscing about the New Jersey based pizza that they found at the Pennsylvania State Fair last summer, where they opened for Cole Swindell, and vowed to take the pizza truck on tour with them, after visiting every afternoon while they were there. Make no mistake: these girls are serious about their food, as well as their music. Perhaps the duo’s success can be attributed as much or more to fate than any masterplan. This young pair’s partnership reaches back to middle school, when each joined the youth singing group, Oklahoma Kids. For Madi, who had been in gymnastics, an injury led her to redirect her attentions to her love of singing. For Alaska, the free-spirit with self-proclaimed “do whatever” attitude, after doing a little bit of everything, including pageants,

a decision to focus on singing led her to the group.

bribery (a promised trip to Schlitterbahn sealed the deal).

Admittedly, the two initially hated each other, as they fought over the affections of the same boy within the group. The pair were ultimately put together for a Christmas performance, however, and between rehearsals, performances and an in-between trip to Old Navy for matching belts, they formed a bond over their love of music and mutual frustration at the girl who did win over the boy.

By the pair’s own admission, the initial audition did not go well. “We sucked that day,” Madi shares with a laugh. “We did a country version of “Billie Jean” and it just didn’t go well.”

The two kept their bond throughout high school, even though Madi attended Jenks and Alaska was at Broken Arrow, and were set to go to different colleges: Alaska to the University of Tulsa and Madi to school in Texas, even though both agree it didn’t seem a good fit. That’s when fate and reality TV stepped in. Ironically, the duo had no intentions of auditioning for The Voice. It was at the suggestion of their mothers that The Voice became part of the conversation. And while the girls initially declined, citing a terrible experience when auditioning for X Factor at the age of 13, they relented with a little old-fashioned

Things went slightly better during their stint on The Voice. “We didn’t know it at the time, but later we found out that the president of the casting company was sitting in on each of our auditions,” Alaska says. “We’re still not really sure how we got so far, but apparently she liked us because we were just normal kids and relaxed. We really didn’t care, because we figured we had nothing to lose.” As the girls exited the show, both 19 years old, they found themselves at a crossroads, asking, “What now?” As the pair returned to Tulsa, they looked to find a manager and started work on their first album, which they completed in two months, recording the first seven songs they ever wrote, along with a few covers. The pair also met their current manager, Jim Halsey. Halsey has guided the careers