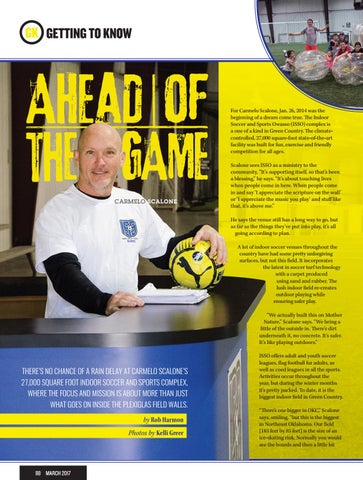 For Carmelo Scalone, Jan. 26, 2014 was the beginning of a dream come true. The Indoor Soccer and Sports Owasso (ISSO) complex is a one of a kind in Green Country. The climatecontrolled, 27,000 square-foot state-of-the-art facility was built for fun, exercise and friendly competition for all ages.

Scalone sees ISSO as a ministry to the community, “It’s supporting itself, so that’s been a blessing,” he says. “It’s about touching lives when people come in here. When people come in and say ‘I appreciate the scripture on the wall’ or ‘I appreciate the music you play’ and stuff like that, it’s above me.” He says the venue still has a long way to go, but as far as the things they’ve put into play, it’s all going according to plan. A lot of indoor soccer venues throughout the country have had some pretty unforgiving surfaces, but not this field. It incorporates the latest in soccer turf technology with a carpet produced using sand and rubber. The lush indoor field re-creates outdoor playing while ensuring safer play. “We actually built this on Mother Nature,” Scalone says. “We bring a little of the outside in. There’s dirt underneath it, no concrete. It’s safer. It’s like playing outdoors.”

THERE’S NO CHANCE OF A RAIN DELAY AT CARMELO SCALONE’S 27,000 SQUARE FOOT INDOOR SOCCER AND SPORTS COMPLEX, WHERE THE FOCUS AND MISSION IS ABOUT MORE THAN JUST WHAT GOES ON INSIDE THE PLEXIGLAS FIELD WALLS. by Rob Harmon Photos by Kelli Greer

ISSO offers adult and youth soccer leagues, flag football for adults, as well as coed leagues in all the sports. Activities occur throughout the year, but during the winter months it’s pretty packed. To date, it is the biggest indoor field in Green Country. “There’s one bigger in OKC,” Scalone says, smiling, “but this is the biggest in Northeast Oklahoma. Our field [185 feet by 85 feet] is the size of an ice-skating rink. Normally you would see the boards and then a little bit