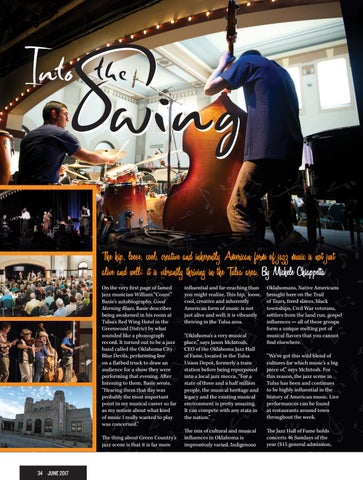 The hip, loose, cool, creative and inherently American form of jazz music is not just alive and well; it is vibrantly thriving in the Tulsa area. By Michele Chiappetta On the very first page of famed jazz musician William “Count” Basie’s autobiography, Good Morning Blues, Basie describes being awakened in his room at Tulsa’s Red Wing Hotel in the Greenwood District by what sounded like a phonograph record. It turned out to be a jazz band called the Oklahoma City Blue Devils, performing live on a flatbed truck to draw an audience for a show they were performing that evening. After listening to them, Basie wrote, “Hearing them that day was probably the most important point in my musical career so far as my notion about what kind of music I really wanted to play was concerned.” The thing about Green Country’s jazz scene is that it is far more

influential and far-reaching than you might realize. This hip, loose, cool, creative and inherently American form of music is not just alive and well; it is vibrantly thriving in the Tulsa area. “Oklahoma’s a very musical place,” says Jason McIntosh, CEO of the Oklahoma Jazz Hall of Fame, located in the Tulsa Union Depot, formerly a train station before being repurposed into a local jazz mecca. “For a state of three and a half million people, the musical heritage and legacy and the existing musical environment is pretty amazing. It can compete with any state in the nation.” The mix of cultural and musical influences in Oklahoma is impressively varied. Indigenous

Oklahomans, Native Americans brought here on the Trail of Tears, freed slaves, black townships, Civil War veterans, settlers from the land run, gospel influences — all of these groups form a unique melting pot of musical flavors that you cannot find elsewhere. “We’ve got this wild blend of cultures for which music’s a big piece of,” says McIntosh. For this reason, the jazz scene in Tulsa has been and continues to be highly influential in the history of American music. Live performances can be found at restaurants around town throughout the week. The Jazz Hall of Fame holds concerts 46 Sundays of the year ($15 general admission,