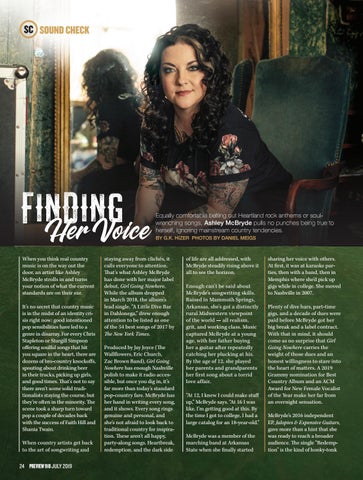 FINDING Her Voice When you think real country music is on the way out the door, an artist like Ashley McBryde strolls in and turns your notion of what the current standards are on their ear. It’s no secret that country music is in the midst of an identity crisis right now: good intentioned pop sensibilities have led to a genre in disarray. For every Chris Stapleton or Sturgill Simpson offering soulful songs that hit you square in the heart, there are dozens of bro-country knockoffs, spouting about drinking beer in their trucks, picking up girls, and good times. That’s not to say there aren’t some solid traditionalists staying the course, but they’re often in the minority. The scene took a sharp turn toward pop a couple of decades back with the success of Faith Hill and Shania Twain. When country artists get back to the art of songwriting and

staying away from clichés, it calls everyone to attention. That’s what Ashley McBryde has done with her major label debut, Girl Going Nowhere. While the album dropped in March 2018, the album’s lead single, “A Little Dive Bar in Dahlonega,” drew enough attention to be listed as one of the 54 best songs of 2017 by The New York Times. Produced by Jay Joyce (The Wallflowers, Eric Church, Zac Brown Band), Girl Going Nowhere has enough Nashville polish to make it radio accessible, but once you dig in, it’s far more than today’s standard pop-country fare. McBryde has her hand in writing every song, and it shows. Every song rings genuine and personal, and she’s not afraid to look back to traditional country for inspiration. These aren’t all happy, party-along songs. Heartbreak, redemption, and the dark side

of life are all addressed, with McBryde steadily rising above it all to see the horizon. Enough can’t be said about McBryde’s songwriting skills. Raised in Mammoth Springs, Arkansas, she’s got a distinctly rural Midwestern viewpoint of the world — all realism, grit, and working class. Music captured McBryde at a young age, with her father buying her a guitar after repeatedly catching her plucking at his. By the age of 12, she played her parents and grandparents her first song about a torrid love affair. “At 12, I knew I could make stuff up,” McBryde says. “At 16 I was like, I’m getting good at this. By the time I got to college, I had a large catalog for an 18-year-old.” McBryde was a member of the marching band at Arkansas State when she finally started

sharing her voice with others. At first, it was at karaoke parties, then with a band, then in Memphis where she’d pick up gigs while in college. She moved to Nashville in 2007. Plenty of dive bars, part-time gigs, and a decade of dues were paid before McBryde got her big break and a label contract. With that in mind, it should come as no surprise that Girl Going Nowhere carries the weight of those dues and an honest willingness to stare into the heart of matters. A 2019 Grammy nomination for Best Country Album and an ACM Award for New Female Vocalist of the Year make her far from an overnight sensation. McBryde’s 2016 independent EP, Jalopies & Expensive Guitars, gave more than a hint that she was ready to reach a broader audience. The single “Redemption” is the kind of honky-tonk