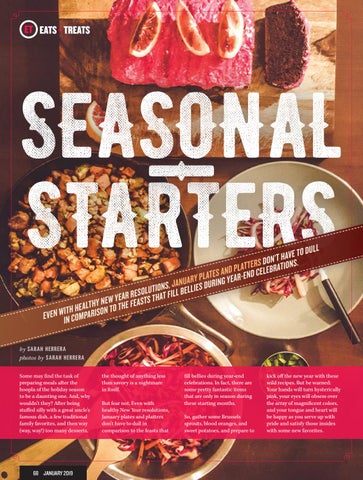 by SARAH HERRERA photos by SARAH HERRERA Some may find the task of preparing meals after the hoopla of the holiday season to be a daunting one. And, why wouldn’t they? After being stuffed silly with a great uncle’s famous dish, a few traditional family favorites, and then way (way, way!) too many desserts,

the thought of anything less than savory is a nightmare in itself. But fear not. Even with healthy New Year resolutions, January plates and platters don’t have to dull in comparison to the feasts that

fill bellies during year-end celebrations. In fact, there are some pretty fantastic items that are only in season during these starting months. So, gather some Brussels sprouts, blood oranges, and sweet potatoes, and prepare to

kick off the new year with these wild recipes. But be warned: Your hands will turn hysterically pink, your eyes will obsess over the array of magnificent colors, and your tongue and heart will be happy as you serve up with pride and satisfy those insides with some new favorites.