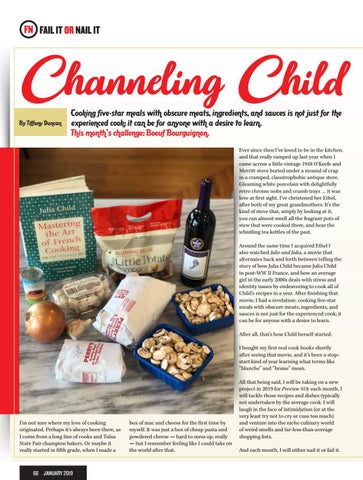 FN FAIL IT OR NAIL IT

Cooking five-star meals with obscure meats, ingredients, and sauces is not just for the experienced cook; it can be for anyone with a desire to learn. This month’s challenge: Boeuf Bourguignon.

Ever since then I’ve loved to be in the kitchen, and that really ramped up last year when I came across a little vintage 1948 O’Keefe and Merritt stove buried under a mound of crap in a cramped, claustrophobic antique store. Gleaming white porcelain with delightfully retro chrome nobs and crumb trays … it was love at first sight. I’ve christened her Ethel, after both of my great grandmothers. It’s the kind of stove that, simply by looking at it, you can almost smell all the fragrant pots of stew that were cooked there, and hear the whistling tea kettles of the past. Around the same time I acquired Ethel I also watched Julie and Julia, a movie that alternates back and forth between telling the story of how Julia Child became Julia Child in post-WW II France, and how an average girl in the early 2000s deals with stress and identity issues by endeavoring to cook all of Child’s recipes in a year. After finishing that movie, I had a revelation: cooking five-star meals with obscure meats, ingredients, and sauces is not just for the experienced cook; it can be for anyone with a desire to learn. After all, that’s how Child herself started. I bought my first real cook books shortly after seeing that movie, and it’s been a stopstart kind of year learning what terms like “blanche” and “braise” mean.

I’m not sure where my love of cooking originated. Perhaps it’s always been there, as I come from a long line of cooks and Tulsa State Fair champion bakers. Or maybe it really started in fifth grade, when I made a

box of mac and cheese for the first time by myself. It was just a box of cheap pasta and powdered cheese — hard to mess up, really — but I remember feeling like I could take on the world after that.

All that being said, I will be taking on a new project in 2019 for Preview 918: each month, I will tackle those recipes and dishes typically not undertaken by the average cook. I will laugh in the face of intimidation (or at the very least try not to cry or cuss too much) and venture into the niche culinary world of weird smells and far-less-than-average shopping lists. And each month, I will either nail it or fail it.