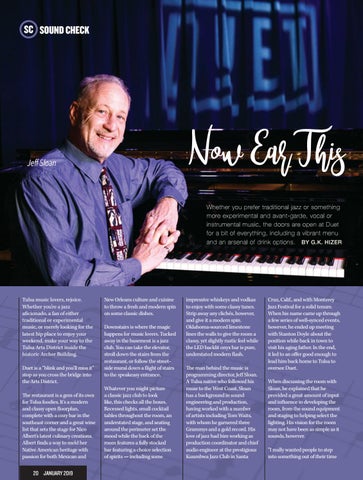 Whether you prefer traditional jazz or something more experimental and avant-garde, vocal or instrumental music, the doors are open at Duet for a bit of everything, including a vibrant menu and an arsenal of drink options. BY G.K. HIZER

Tulsa music lovers, rejoice. Whether you’re a jazz aficionado, a fan of either traditional or experimental music, or merely looking for the latest hip place to enjoy your weekend, make your way to the Tulsa Arts District inside the historic Archer Building. Duet is a “blink and you’ll miss it” stop as you cross the bridge into the Arts District. The restaurant is a gem of its own for Tulsa foodies. It’s a modern and classy open floorplan, complete with a cozy bar in the southeast corner and a great wine list that sets the stage for Nico Albert’s latest culinary creations. Albert finds a way to meld her Native American heritage with passion for both Mexican and

New Orleans culture and cuisine to throw a fresh and modern spin on some classic dishes. Downstairs is where the magic happens for music lovers. Tucked away in the basement is a jazz club. You can take the elevator, stroll down the stairs from the restaurant, or follow the streetside mural down a flight of stairs to the speakeasy entrance. Whatever you might picture a classic jazz club to look like, this checks all the boxes. Recessed lights, small cocktail tables throughout the room, an understated stage, and seating around the perimeter set the mood while the back of the room features a fully stocked bar featuring a choice selection of spirits — including some

impressive whiskeys and vodkas to enjoy with some classy tunes. Strip away any clichés, however, and give it a modern spin. Oklahoma-sourced limestone lines the walls to give the room a classy, yet slightly rustic feel while the LED backlit onyx bar is pure, understated modern flash. The man behind the music is programming director, Jeff Sloan. A Tulsa native who followed his muse to the West Coast, Sloan has a background in sound engineering and production, having worked with a number of artists including Tom Waits, with whom he garnered three Grammys and a gold record. His love of jazz had him working as production coordinator and chief audio engineer at the prestigious Kuumbwa Jazz Club in Santa

Cruz, Calif., and with Monterey Jazz Festival for a solid tenure. When his name came up through a few series of well-synced events, however, he ended up meeting with Stanton Doyle about the position while back in town to visit his aging father. In the end, it led to an offer good enough to lead him back home to Tulsa to oversee Duet. When discussing the room with Sloan, he explained that he provided a great amount of input and influence in developing the room, from the sound equipment and staging to helping select the lighting. His vision for the room may not have been as simple as it sounds, however. “I really wanted people to step into something out of their time