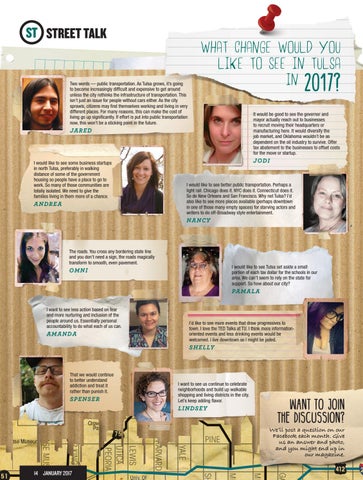 Two words — public transportation. As Tulsa grows, it’s going to become increasingly difficult and expensive to get around unless the city rethinks the infrastructure of transportation. This isn’t just an issue for people without cars either. As the city sprawls, citizens may find themselves working and living in very different places. For many reasons, this can make the cost of living go up significantly. If effort is put into public transportation now, this won’t be a sticking point in the future.

WHAT CHANGE WOULD YOU LIKE TO SEE IN TULSA IN 201 7? It would be good to see the governor and mayor actually reach out to businesses to recruit moving their headquarters or manufacturing here. It would diversify the job market, and Oklahoma wouldn’t be as dependent on the oil industry to survive. Offer tax abatement to the businesses to offset costs for the move or startup.

I would like to see some business startups in north Tulsa, preferably in walking distance of some of the government housing so people have a place to go to work. So many of those communities are totally isolated. We need to give the families living in them more of a chance.

I would like to see better public transportation. Perhaps a light rail. Chicago does it. NYC does it. Connecticut does it. So do New Orleans and San Francisco. Why not Tulsa? I’d also like to see more places available (perhaps downtown in one of those many empty spaces) for starving actors and writers to do off-Broadway style entertainment.

The roads. You cross any bordering state line and you don’t need a sign, the roads magically transform to smooth, even pavement.

I would like to see Tulsa set aside a small portion of each tax dollar for the schools in our area. We can’t seem to rely on the state for support. So how about our city?

PAMA LA I want to see less action based on fear and more nurturing and inclusion of the people around us. Essentially personal accountability to do what each of us can.

I’d like to see more events that draw progressives to town. I love the TED Talks at TU. I think more informationoriented events and less drinking events would be welcomed. I live downtown so I might be jaded.

That we would continue to better understand addiction and treat it rather than punish it.

I want to see us continue to celebrate neighborhoods and build up walkable shopping and living districts in the city. Let’s keep adding flavor.

Want to join the discussion? We’ll post a question on our Facebook each month. Give us an answer and photo, and you might end up in our magazine.