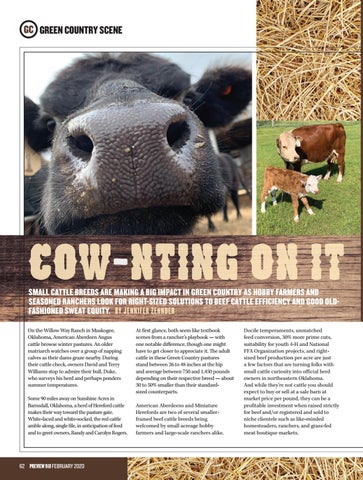 Cow-nting On It SMALL CATTLE BREEDS ARE MAKING A BIG IMPACT IN GREEN COUNTRY AS HOBBY FARMERS AND SEASONED RANCHERS LOOK FOR RIGHT-SIZED SOLUTIONS TO BEEF CATTLE EFFICIENCY AND GOOD OLDFASHIONED SWEAT EQUITY. BY JENNIFER ZEHNDER On the Willow Way Ranch in Muskogee, Oklahoma, American Aberdeen Angus cattle browse winter pastures. An older matriarch watches over a group of napping calves as their dams graze nearby. During their cattle check, owners David and Terry Williams stop to admire their bull, Duke, who surveys his herd and perhaps ponders summer temperatures. Some 90 miles away on Sunshine Acres in Barnsdall, Oklahoma, a herd of Hereford cattle makes their way toward the pasture gate. White-faced and white-socked, the red cattle amble along, single file, in anticipation of feed and to greet owners, Randy and Carolyn Rogers.

At first glance, both seem like textbook scenes from a rancher’s playbook — with one notable difference, though one might have to get closer to appreciate it. The adult cattle in these Green Country pastures stand between 26 to 48 inches at the hip and average between 750 and 1,450 pounds depending on their respective breed — about 30 to 50% smaller than their standardsized counterparts. American Aberdeens and Miniature Herefords are two of several smallerframed beef cattle breeds being welcomed by small acreage hobby farmers and large-scale ranchers alike.

Docile temperaments, unmatched feed conversion, 30% more prime cuts, suitability for youth 4-H and National FFA Organization projects, and rightsized beef production per acre are just a few factors that are turning folks with small cattle curiosity into official herd owners in northeastern Oklahoma. And while they’re not cattle you should expect to buy or sell at a sale barn at market price per pound, they can be a profitable investment when raised strictly for beef and/or registered and sold to niche clientele such as like-minded homesteaders, ranchers, and grass-fed meat boutique markets.