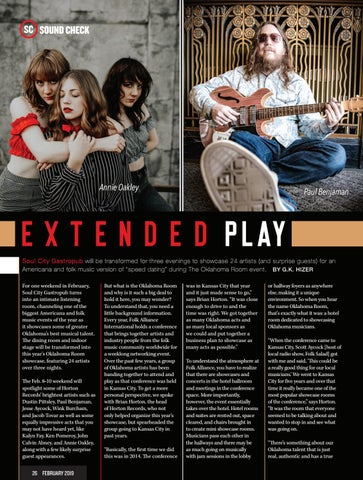 E x t e n d e d Play Soul City Gastropub will be transformed for three evenings to showcase 24 artists (and surprise guests) for an Americana and folk music version of “speed dating” during The Oklahoma Room event. BY G.K. HIZER For one weekend in February, Soul City Gastropub turns into an intimate listening room, channeling one of the biggest Americana and folk music events of the year as it showcases some of greater Oklahoma’s best musical talent. The dining room and indoor stage will be transformed into this year’s Oklahoma Room showcase, featuring 24 artists over three nights. The Feb. 8-10 weekend will spotlight some of Horton Records’ brightest artists such as Dustin Pittsley, Paul Benjaman, Jesse Aycock, Wink Burcham, and Jacob Tovar as well as some equally impressive acts that you may not have heard yet, like Kalyn Fay, Ken Pomeroy, John Calvin Abney, and Annie Oakley, along with a few likely surprise guest appearances.

But what is the Oklahoma Room and why is it such a big deal to hold it here, you may wonder? To understand that, you need a little background information. Every year, Folk Alliance International holds a conference that brings together artists and industry people from the folk music community worldwide for a weeklong networking event. Over the past few years, a group of Oklahoma artists has been banding together to attend and play as that conference was held in Kansas City. To get a more personal perspective, we spoke with Brian Horton, the head of Horton Records, who not only helped organize this year’s showcase, but spearheaded the group going to Kansas City in past years. “Basically, the first time we did this was in 2014. The conference

was in Kansas City that year and it just made sense to go,” says Brian Horton. “It was close enough to drive to and the time was right. We got together as many Oklahoma acts and as many local sponsors as we could and put together a business plan to showcase as many acts as possible.” To understand the atmosphere at Folk Alliance, you have to realize that there are showcases and concerts in the hotel ballroom and meetings in the conference space. More importantly, however, the event essentially takes over the hotel. Hotel rooms and suites are rented out, space cleared, and chairs brought in to create mini showcase rooms. Musicians pass each other in the hallways and there may be as much going on musically with jam sessions in the lobby

or hallway foyers as anywhere else, making it a unique environment. So when you hear the name Oklahoma Room, that’s exactly what it was: a hotel room dedicated to showcasing Oklahoma musicians. “When the conference came to Kansas City, Scott Aycock [host of local radio show, Folk Salad] got with me and said, ‘This could be a really good thing for our local musicians.’ We went to Kansas City for five years and over that time it really became one of the most popular showcase rooms of the conference,” says Horton. “It was the room that everyone seemed to be talking about and wanted to stop in and see what was going on. “There’s something about our Oklahoma talent that is just real, authentic and has a true