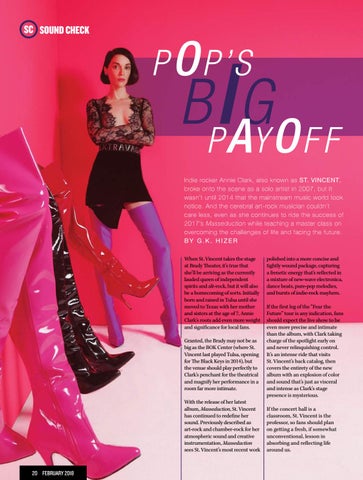 BPIAGY O F F Indie rocker Annie Clark, also known as ST. VINCENT, broke onto the scene as a solo artist in 2007, but it wasn’t until 2014 that the mainstream music world took notice. And the cerebral art-rock musician couldn’t care less, even as she continues to ride the success of 2017’s Masseduction while teaching a master class on overcoming the challenges of life and facing the future. BY G.K. HIZER When St. Vincent takes the stage at Brady Theater, it’s true that she’ll be arriving as the currently lauded queen of independent spirits and alt-rock, but it will also be a homecoming of sorts. Initially born and raised in Tulsa until she moved to Texas with her mother and sisters at the age of 7, Annie Clark’s roots add even more weight and significance for local fans. Granted, the Brady may not be as big as the BOK Center (where St. Vincent last played Tulsa, opening for The Black Keys in 2014), but the venue should play perfectly to Clark’s penchant for the theatrical and magnify her performance in a room far more intimate. With the release of her latest album, Masseduction, St. Vincent has continued to redefine her sound. Previously described as art-rock and chamber-rock for her atmospheric sound and creative instrumentation, Masseduction sees St. Vincent’s most recent work

polished into a more concise and tightly wound package, capturing a frenetic energy that’s reflected in a mixture of new-wave electronica, dance beats, pure-pop melodies, and bursts of indie-rock mayhem. If the first leg of the “Fear the Future” tour is any indication, fans should expect the live show to be even more precise and intimate than the album, with Clark taking charge of the spotlight early on and never relinquishing control. It’s an intense ride that visits St. Vincent’s back catalog, then covers the entirety of the new album with an explosion of color and sound that’s just as visceral and intense as Clark’s stage presence is mysterious. If the concert hall is a classroom, St. Vincent is the professor, so fans should plan on getting a fresh, if somewhat unconventional, lesson in absorbing and reflecting life around us.