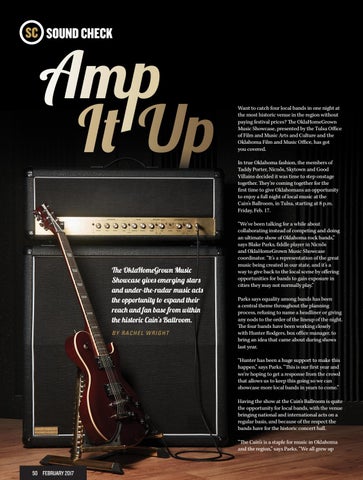 Want to catch four local bands in one night at the most historic venue in the region without paying festival prices? The OklaHomeGrown Music Showcase, presented by the Tulsa Office of Film and Music Arts and Culture and the Oklahoma Film and Music Office, has got you covered. In true Oklahoma fashion, the members of Taddy Porter, Nicno-s, Skytown and Good Villains decided it was time to step onstage together. They’re coming together for the first time to give Oklahomans an opportunity to enjoy a full night of local music at the Cain’s Ballroom, in Tulsa, starting at 8 p.m. Friday, Feb. 17.

The OklaHomeGrown Music Showcase gives emerging stars and under-the-radar music acts the opportunity to expand their reach and fan base from within the historic Cain’s Ballroom. BY RACHEL WRIGHT

“We’ve been talking for a while about collaborating instead of competing and doing an ultimate show of Oklahoma rock bands,” says Blake Parks, fiddle player in Nicno-s and OklaHomeGrown Music Showcase coordinator. “It’s a representation of the great music being created in our state, and it’s a way to give back to the local scene by offering opportunities for bands to gain exposure in cities they may not normally play.” Parks says equality among bands has been a central theme throughout the planning process, refusing to name a headliner or giving any nods to the order of the lineup of the night. The four bands have been working closely with Hunter Rodgers, box office manager, to bring an idea that came about during shows last year. “Hunter has been a huge support to make this happen,” says Parks. “This is our first year and we’re hoping to get a response from the crowd that allows us to keep this going so we can showcase more local bands in years to come.” Having the show at the Cain’s Ballroom is quite the opportunity for local bands, with the venue bringing national and international acts on a regular basis, and because of the respect the bands have for the historic concert hall. “The Cain’s is a staple for music in Oklahoma and the region,” says Parks. “We all grew up