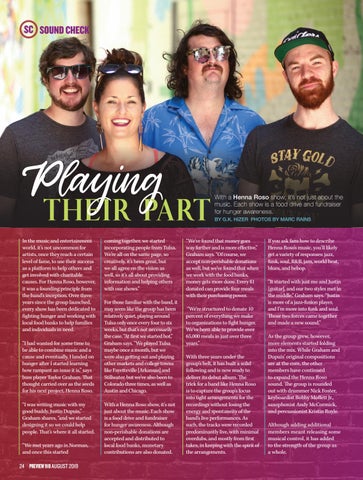 With a Henna Roso show, it’s not just about the music. Each show is a food drive and fundraiser for hunger awareness. BY G.K. HIZER PHOTOS BY MARC RAINS

In the music and entertainment world, it’s not uncommon for artists, once they reach a certain level of fame, to use their success as a platform to help others and get involved with charitable causes. For Henna Roso, however, it was a founding principle from the band’s inception. Over three years since the group launched, every show has been dedicated to fighting hunger and working with local food banks to help families and individuals in need. “I had wanted for some time to be able to combine music and a cause and eventually, I landed on hunger after I started learning how rampant an issue it is,” says bass player Taylor Graham. That thought carried over as the seeds for his next project, Henna Roso. “I was writing music with my good buddy, Justin Dupuis,” Graham shares, “and we started designing it so we could help people. That’s where it all started. “We met years ago in Norman, and once this started

coming together, we started incorporating people from Tulsa. We’re all on the same page, so creatively, it’s been great, but we all agree on the vision as well, so it’s all about providing information and helping others with our shows.” For those familiar with the band, it may seem like the group has been relatively quiet, playing around Tulsa only once every four to six weeks, but that’s not necessarily the case. “At first we started hot,” Graham says. “We played Tulsa maybe once a month, but we were also getting out and playing other markets and college towns like Fayetteville [Arkansas] and Stillwater, but we’ve also been to Colorado three times, as well as Austin and Chicago. With a Henna Roso show, it’s not just about the music. Each show is a food drive and fundraiser for hunger awareness. Although non-perishable donations are accepted and distributed to local food banks, monetary contributions are also donated.

“We’ve found that money goes way further and is more effective,” Graham says. “Of course, we accept non-perishable donations as well, but we’ve found that when we work with the food banks, money gets more done. Every $1 donated can provide four meals with their purchasing power. “We’re structured to donate 10 percent of everything we make to organizations to fight hunger. We’ve been able to provide over 65,000 meals in just over three years.” With three years under the group’s belt, it has built a solid following and is now ready to deliver its debut album. The trick for a band like Henna Roso is to capture the group’s focus into tight arrangements for the recordings without losing the energy and spontaneity of the band’s live performances. As such, the tracks were recorded predominantly live, with minimal overdubs, and mostly from first takes, in keeping with the spirit of the arrangements.

If you ask fans how to describe Henna Roso’s music, you’ll likely get a variety of responses: jazz, funk, soul, R&B, jam, world beat, blues, and bebop. “It started with just me and Justin [guitar], and our two styles met in the middle,” Graham says. “Justin is more of a jazz-fusion player, and I’m more into funk and soul. Those two forces came together and made a new sound.” As the group grew, however, more elements started folding into the mix. While Graham and Dupuis’ original compositions are at the core, the other members have continued to expand the Henna Roso sound. The group is rounded out with drummer Nick Foster, keyboardist Bobby Moffett Jr., saxophonist Andy McCormick, and percussionist Kristin Ruyle. Although adding additional members meant releasing some musical control, it has added to the strength of the group as a whole.