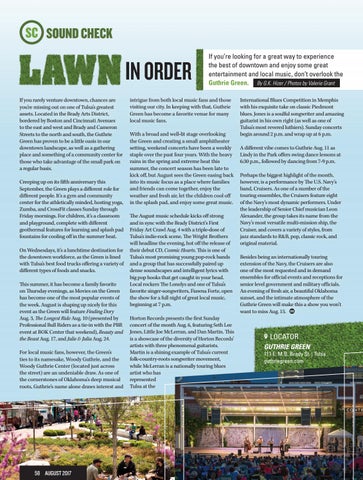 IN ORDER If you rarely venture downtown, chances are you’re missing out on one of Tulsa’s greatest assets. Located in the Brady Arts District, bordered by Boston and Cincinnati Avenues to the east and west and Brady and Cameron Streets to the north and south, the Guthrie Green has proven to be a little oasis in our downtown landscape, as well as a gathering place and something of a community center for those who take advantage of the small park on a regular basis. Creeping up on its fifth anniversary this September, the Green plays a different role for different people. It’s a gym and community center for the athletically minded, hosting yoga, Zumba, and CrossFit classes Sunday through Friday mornings. For children, it’s a classroom and playground, complete with different geothermal features for learning and splash pad fountains for cooling off in the summer heat. On Wednesdays, it’s a lunchtime destination for the downtown workforce, as the Green is lined with Tulsa’s best food trucks offering a variety of different types of foods and snacks. This summer, it has become a family favorite on Thursday evenings, as Movies on the Green has become one of the most popular events of the week. August is shaping up nicely for this event as the Green will feature Finding Dory Aug. 3, The Longest Ride Aug. 10 (presented by Professional Bull Riders as a tie-in with the PBR event at BOK Center that weekend), Beauty and the Beast Aug. 17, and Julie & Julia Aug. 24. For local music fans, however, the Green’s ties to its namesake, Woody Guthrie, and the Woody Guthrie Center (located just across the street) are an undeniable draw. As one of the cornerstones of Oklahoma’s deep musical roots, Guthrie’s name alone draws interest and

If you’re looking for a great way to experience the best of downtown and enjoy some great entertainment and local music, don’t overlook the Guthrie Green. By G.K. Hizer / Photos by Valerie Grant

intrigue from both local music fans and those visiting our city. In keeping with that, Guthrie Green has become a favorite venue for many local music fans. With a broad and well-lit stage overlooking the Green and creating a small amphitheater setting, weekend concerts have been a weekly staple over the past four years. With the heavy rains in the spring and extreme heat this summer, the concert season has been late to kick off, but August sees the Green easing back into its music focus as a place where families and friends can come together, enjoy the weather and fresh air, let the children cool off in the splash pad, and enjoy some great music. The August music schedule kicks off strong and in sync with the Brady District’s First Friday Art Crawl Aug. 4 with a triple-dose of Tulsa’s indie-rock scene. The Wright Brothers will headline the evening, hot off the release of their debut CD, Cosmic Hearts. This is one of Tulsa’s most promising young pop-rock bands and a group that has successfully paired up dense soundscapes and intelligent lyrics with big pop hooks that get caught in your head. Local rockers The Lonelys and one of Tulsa’s favorite singer-songwriters, Fiawna Forte, open the show for a full night of great local music, beginning at 7 p.m. Horton Records presents the first Sunday concert of the month Aug. 6, featuring Seth Lee Jones, Little Joe McLerran, and Dan Martin. This is a showcase of the diversity of Horton Records’ artists with three phenomenal guitarists. Martin is a shining example of Tulsa’s current folk-country-roots songwriter movement, while McLerran is a nationally touring blues artist who has represented Tulsa at the

International Blues Competition in Memphis with his exquisite take on classic Piedmont blues. Jones is a soulful songwriter and amazing guitarist in his own right (as well as one of Tulsa’s most revered luthiers). Sunday concerts begin around 2 p.m. and wrap up at 6 p.m. A different vibe comes to Guthrie Aug. 11 as Lindy in the Park offers swing dance lessons at 6:30 p.m., followed by dancing from 7-9 p.m. Perhaps the biggest highlight of the month, however, is a performance by The U.S. Navy’s band, Cruisers. As one of a number of the touring ensembles, the Cruisers feature eight of the Navy’s most dynamic performers. Under the leadership of Senior Chief musician Leon Alexander, the group takes its name from the Navy’s most versatile multi-mission ship, the Cruiser, and covers a variety of styles, from jazz standards to R&B, pop, classic rock, and original material. Besides being an internationally touring extension of the Navy, the Cruisers are also one of the most requested and in demand ensembles for official events and receptions for senior level government and military officials. An evening of fresh air, a beautiful Oklahoma sunset, and the intimate atmosphere of the Guthrie Green will make this a show you won’t want to miss Aug. 15.