How does it feel to be young, in love and in lust in berlin? | dazed 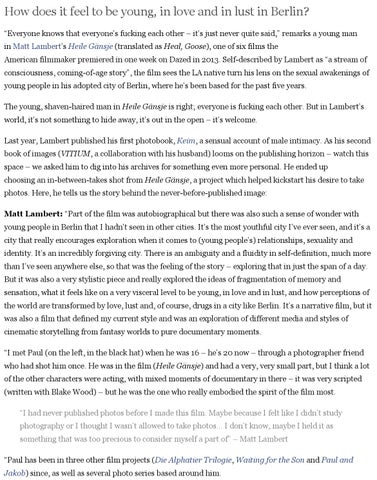 How does it feel to be young, in love and in lust in Berlin? “Everyone knows that everyone’s fucking each other – it’s just never quite said,” remarks a young man in Matt Lambert’s Heile Gänsje (translated as Heal, Goose), one of six films the American filmmaker premiered in one week on Dazed in 2013. Self-described by Lambert as “a stream of consciousness, coming-of-age story”, the film sees the LA native turn his lens on the sexual awakenings of young people in his adopted city of Berlin, where he’s been based for the past five years. The young, shaven-haired man in Heile Gänsje is right; everyone is fucking each other. But in Lambert’s world, it’s not something to hide away, it’s out in the open – it’s welcome. Last year, Lambert published his first photobook, Keim, a sensual account of male intimacy. As his second book of images (VITIUM, a collaboration with his husband) looms on the publishing horizon – watch this space – we asked him to dig into his archives for something even more personal. He ended up choosing an in-between-takes shot from Heile Gänsje, a project which helped kickstart his desire to take photos. Here, he tells us the story behind the never-before-published image: Matt Lambert: “Part of the film was autobiographical but there was also such a sense of wonder with young people in Berlin that I hadn’t seen in other cities. It’s the most youthful city I’ve ever seen, and it’s a city that really encourages exploration when it comes to (young people’s) relationships, sexuality and identity. It’s an incredibly forgiving city. There is an ambiguity and a fluidity in self-definition, much more than I’ve seen anywhere else, so that was the feeling of the story – exploring that in just the span of a day. But it was also a very stylistic piece and really explored the ideas of fragmentation of memory and sensation, what it feels like on a very visceral level to be young, in love and in lust, and how perceptions of the world are transformed by love, lust and, of course, drugs in a city like Berlin. It’s a narrative film, but it was also a film that defined my current style and was an exploration of different media and styles of cinematic storytelling from fantasy worlds to pure documentary moments. “I met Paul (on the left, in the black hat) when he was 16 – he’s 20 now – through a photographer friend who had shot him once. He was in the film (Heile Gänsje) and had a very, very small part, but I think a lot of the other characters were acting, with mixed moments of documentary in there – it was very scripted (written with Blake Wood) – but he was the one who really embodied the spirit of the film most. “I had never published photos before I made this film. Maybe because I felt like I didn’t study photography or I thought I wasn’t allowed to take photos... I don’t know, maybe I held it as something that was too precious to consider myself a part of” – Matt Lambert “Paul has been in three other film projects (Die Alphatier Trilogie, Waiting for the Son and Paul and Jakob) since, as well as several photo series based around him.

“Often I will throw my friends into my films, just to have a little moment, a lot of little cameos of special people that I meet on the way. (With) Paul, I think we’ve done seven projects together (now). “(This photo) was taken in-between scenes, so we probably called ‘cut’ and had five minutes while we were changing lenses, changing cards or whatever, and this was a kind of down moment in-between scenes, but still very much a scene. This was actually the graveyard where Marlene Dietrich and Helmut Newton are buried next to each other. It’s in a neighbourhood called Schöneberg, an old neighbourhood in the west of Berlin. She used to hang out there in the 20s, and it still has an important presence in the gay and arts culture of the city. “I had never published photos before I made this film. Maybe because I felt like I didn’t study photography or I thought I wasn’t allowed to take photos... I don’t know, maybe I held it as something that was too precious to consider myself a part of. It started as an economic necessity for me – I couldn’t make a short films about everything and everyone. But maybe I would meet someone that was an interesting person who I’m not going to write an entire script about, but I would like to find a way at least to document the experience with them. Photography was a way to engage with people and then also to see if they were dynamic enough to make a film with, and if people weren’t right for that, at least, we could make a great series of photos together, and the ones who really had a lot to say and felt like they lived beyond a photo, would become part of my film world. So, yeah, it really started as an auditioning or developmental tool. “For this film, I only shot four rolls (of photography), so I shot very little and we picked the best ten (shots for publication alongside the film). There’s one picture of three people in bed that must’ve been published over 50 times – it’s crazy, but then it loses meaning to you. It becomes that image, a press photo. It becomes the image that’s just on that Dropbox link that you send to people interviewing you, as a press thing. You lose the essence of that image because it becomes public domain.” Watch the film in full below:

How does it feel to be young, in love and in lust in berlin? | dazed 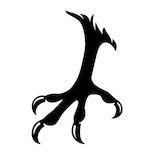