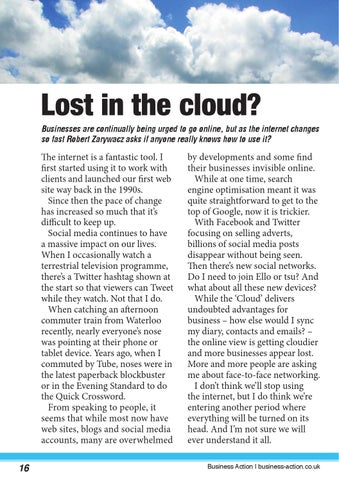 Lost in the cloud? Businesses are continually being urged to go online, but as the internet changes so fast Robert Zarywacz asks if anyone really knows how to use it?

The internet is a fantastic tool. I first started using it to work with clients and launched our first web site way back in the 1990s. Since then the pace of change has increased so much that it’s difficult to keep up. Social media continues to have a massive impact on our lives. When I occasionally watch a terrestrial television programme, there’s a Twitter hashtag shown at the start so that viewers can Tweet while they watch. Not that I do. When catching an afternoon commuter train from Waterloo recently, nearly everyone’s nose was pointing at their phone or tablet device. Years ago, when I commuted by Tube, noses were in the latest paperback blockbuster or in the Evening Standard to do the Quick Crossword. From speaking to people, it seems that while most now have web sites, blogs and social media accounts, many are overwhelmed 16

by developments and some find their businesses invisible online. While at one time, search engine optimisation meant it was quite straightforward to get to the top of Google, now it is trickier. With Facebook and Twitter focusing on selling adverts, billions of social media posts disappear without being seen. Then there’s new social networks. Do I need to join Ello or tsu? And what about all these new devices? While the ‘Cloud’ delivers undoubted advantages for business – how else would I sync my diary, contacts and emails? – the online view is getting cloudier and more businesses appear lost. More and more people are asking me about face-to-face networking. I don’t think we’ll stop using the internet, but I do think we’re entering another period where everything will be turned on its head. And I’m not sure we will ever understand it all. Business Action | business-action.co.uk 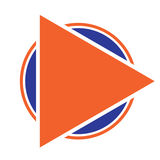 Business Action is the magazine for NDBA members and businesses in North Devon, featuring articles on practical business advice and topical...

Business Action is the magazine for NDBA members and businesses in North Devon, featuring articles on practical business advice and topical...