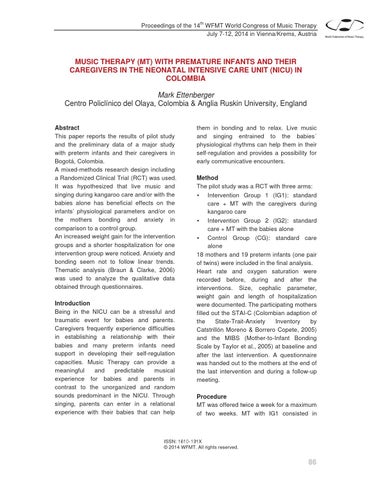 Proceedings of the 14 WFMT World Congress of Music Therapy July 7-12, 2014 in Vienna/Krems, Austria

Abstract This paper reports the results of pilot study and the preliminary data of a major study with preterm infants and their caregivers in Bogotá, Colombia. A mixed-methods research design including a Randomized Clinical Trial (RCT) was used. It was hypothesized that live music and singing during kangaroo care and/or with the babies alone has beneficial effects on the infants’ physiological parameters and/or on the mothers bonding and anxiety in comparison to a control group. An increased weight gain for the intervention groups and a shorter hospitalization for one intervention group were noticed. Anxiety and bonding seem not to follow linear trends. Thematic analysis (Braun &amp; Clarke, 2006) was used to analyze the qualitative data obtained through questionnaires. Introduction Being in the NICU can be a stressful and traumatic event for babies and parents. Caregivers frequently experience difficulties in establishing a relationship with their babies and many preterm infants need support in developing their self-regulation capacities. Music Therapy can provide a meaningful and predictable musical experience for babies and parents in contrast to the unorganized and random sounds predominant in the NICU. Through singing, parents can enter in a relational experience with their babies that can help

them in bonding and to relax. Live music and singing entrained to the babies´ physiological rhythms can help them in their self-regulation and provides a possibility for early communicative encounters. Method The pilot study was a RCT with three arms: • Intervention Group 1 (IG1): standard care + MT with the caregivers during kangaroo care • Intervention Group 2 (IG2): standard care + MT with the babies alone • Control Group (CG): standard care alone 18 mothers and 19 preterm infants (one pair of twins) were included in the final analysis. Heart rate and oxygen saturation were recorded before, during and after the interventions. Size, cephalic parameter, weight gain and length of hospitalization were documented. The participating mothers filled out the STAI-C (Colombian adaption of the State-Trait-Anxiety Inventory by Catstrillón Moreno &amp; Borrero Copete, 2005) and the MIBS (Mother-to-Infant Bonding Scale by Taylor et al., 2005) at baseline and after the last intervention. A questionnaire was handed out to the mothers at the end of the last intervention and during a follow-up meeting. Procedure MT was offered twice a week for a maximum of two weeks. MT with IG1 consisted in