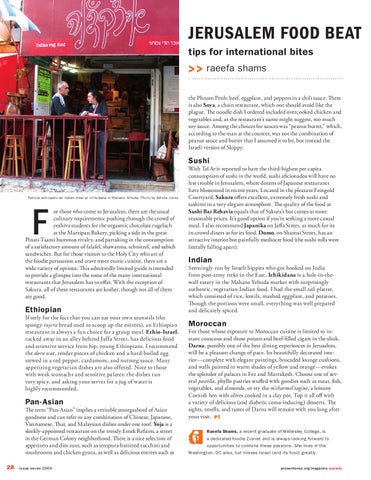 the Phnom Penh: beef, eggplant, and peppers in a chili sauce. There is also Soya, a chain restaurant, which one should avoid like the plague. The noodle dish I ordered included overcooked chicken and vegetables and, as the restaurant’s name might suggest, too much soy sauce. Among the choices for sauces was “peanut butter,” which, according to the man at the counter, was not the combination of peanut sauce and butter that I assumed it to be, but instead the Israeli version of Skippy.

or those who come to Jerusalem, there are the usual culinary requirements: pushing through the crowd of yeshiva students for the orgasmic chocolate rugelach at the Marzipan Bakery, picking a side in the great Pinati-Taami hummus rivalry, and partaking in the consumption of a satisfactory amount of falafel, shawarma, schnitzel, and sabich sandwiches. But for those visitors to the Holy City who are of the foodie persuasion and crave more exotic cuisine, there are a wide variety of options. This admittedly limited guide is intended to provide a glimpse into the some of the many international restaurants that Jerusalem has to offer. With the exception of Sakura, all of these restaurants are kosher, though not all of them are good.

Ethiopian If only for the fact that you can eat your own utenstils (the spongy injera bread used to scoop up the entrees), an Ethiopian restaurant is always a fun choice for a group meal. Ethio-Israel, tucked away in an alley behind Jaffa Street, has delicious food and attentive service from hip, young Ethiopians. I recommend the doro wat, tender pieces of chicken and a hard-boiled egg stewed in a red pepper, cardamom, and nutmeg sauce. Many appetizing vegetarian dishes are also offered. Note to those with weak stomachs and sensitive palates: the dishes run very spicy, and asking your server for a jug of water is highly recommended.

Pan-Asian The term “Pan-Asian” implies a veritable smorgasbord of Asian goodness and can refer to any combination of Chinese, Japanese, Vietnamese, Thai, and Malaysian dishes under one roof. Yoja is a sleekly-appointed restaurant on the trendy Emek Refaim, a street in the German Colony neighborhood. There is a nice selection of appetizers and dim sum, such as tempura-battered zucchini and mushrooms and chicken gyoza, as well as delicious entrees such as 28

With Tel Aviv reported to have the third-highest per capita consumption of sushi in the world, sushi aficionados will have no less trouble in Jerusalem, where dozens of Japanese restaurants have blossomed in recent years. Located in the pleasant Feingold Courtyard, Sakura offers excellent, extremely fresh sushi and sashimi in a very elegant atmosphere. The quality of the food at Sushi Bar Rehavia equals that of Sakura’s but comes at more reasonable prices. It’s good option if you’re seeking a more casual meal. I also recommend Japanika on Jaffa Street, as much for its in-crowd diners as for its food. Domo, on Shamai Street, has an attractive interior but painfully mediocre food (the sushi rolls were literally falling apart).

Indian Seemingly run by Israeli hippies who got hooked on India from post-army treks in the East, Ichikidana is a hole-in-thewall eatery in the Mahane Yehuda market with surprisingly authentic, vegetarian Indian food. I had the small tali platter, which consisted of rice, lentils, mashed eggplant, and potatoes. Though the portions were small, everything was well prepared and delicately spiced.

Moroccan For those whose exposure to Moroccan cuisine is limited to instant couscous and those potato and beef-filled cigars in the shuk, Darna, possibly one of the best dining experiences in Jerusalem, will be a pleasant change of pace. Its beautifully decorated interior—complete with elegant paintings, brocaded lounge cushions, and walls painted in warm shades of yellow and orange—evokes the splendor of palaces in Fez and Marrakesh. Choose one of several pastilla, phyllo pastries stuffed with goodies such as meat, fish, vegetables, and almonds, or try the m’charmel tagine, a lemony Cornish hen with olives cooked in a clay pot. Top it all off with a variety of delicious (and diabetic coma-inducing) desserts. The sights, smells, and tastes of Darna will remain with you long after your visit. Raeefa Shams, a recent graduate of Wellesley College, is a dedicated foodie Zionist and is always looking forward to opportunities to combine these passions. She lives in the Washington, DC area, but misses Israel (and its food) greatly. presentense.org/magazine society 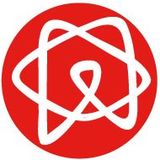