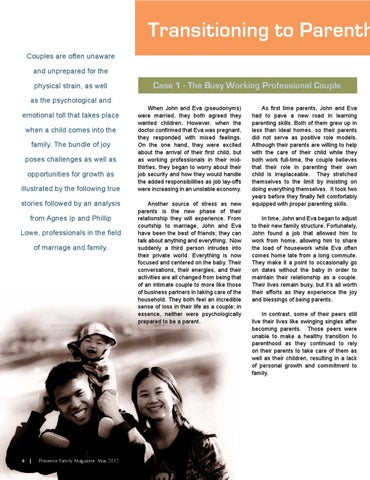 Transitioning to Parenth Couples are often unaware and unprepared for the

physical strain, as well as the psychological and emotional toll that takes place when a child comes into the family. The bundle of joy poses challenges as well as opportunities for growth as illustrated by the following true stories followed by an analysis from Agnes Ip and Phillip Lowe, professionals in the field of marriage and family.

When John and Eva (pseudonyms) were married, they both agreed they wanted children. However, when the doctor confirmed that Eva was pregnant, they responded with mixed feelings. On the one hand, they were excited about the arrival of their first child, but as working professionals in their midthirties, they began to worry about their job security and how they would handle the added responsibilities as job lay-offs were increasing in an unstable economy. Another source of stress as new parents is the new phase of their relationship they will experience. From courtship to marriage, John and Eva have been the best of friends; they can talk about anything and everything. Now suddenly a third person intrudes into their private world. Everything is now focused and centered on the baby. Their conversations, their energies, and their activities are all changed from being that of an intimate couple to more like those of business partners in taking care of the household. They both feel an incredible sense of loss in their life as a couple; in essence, neither were psychologically prepared to be a parent.

As first time parents, John and Eva had to pave a new road in learning parenting skills. Both of them grew up in less than ideal homes, so their parents did not serve as positive role models. Although their parents are willing to help with the care of their child while they both work full-time, the couple believes that their role in parenting their own child is irreplaceable. They stretched themselves to the limit by insisting on doing everything themselves. It took two years before they finally felt comfortably equipped with proper parenting skills. In time, John and Eva began to adjust to their new family structure. Fortunately, John found a job that allowed him to work from home, allowing him to share the load of housework while Eva often comes home late from a long commute. They make it a point to occasionally go on dates without the baby in order to maintain their relationship as a couple. Their lives remain busy, but itâ&amp;#x20AC;&amp;#x2122;s all worth their efforts as they experience the joy and blessings of being parents. In contrast, some of their peers still live their lives like swinging singles after becoming parents. Those peers were unable to make a healthy transition to parenthood as they continued to rely on their parents to take care of them as well as their children, resulting in a lack of personal growth and commitment to family.

Magazine to equip family to grow strong in relationship and in faith. 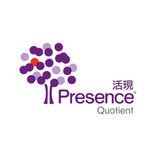