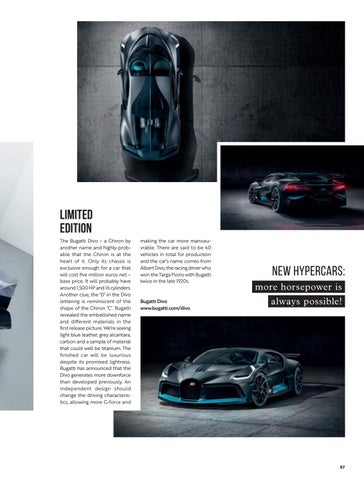 LIMITED EDITION The Bugatti Divo – a Chiron by another name and highly probable that the Chiron is at the heart of it. Only its chassis is exclusive enough for a car that will cost five million euros net – base price. It will probably have around 1,500 HP and 16 cylinders. Another clue, the ‘D’ in the Divo lettering is reminiscent of the shape of the Chiron ‘C’. Bugatti revealed the embellished name and different materials in the first release picture. We’re seeing light blue leather, grey alcantara, carbon and a sample of material that could well be titanium. The finished car will be luxurious despite its promised lightness. Bugatti has announced that the Divo generates more downforce than developed previously. An independent design should change the driving characteristics, allowing more G-force and

making the car more manoeuvrable. There are said to be 40 vehicles in total for production and the car’s name comes from Albert Divo, the racing driver who won the Targa Florio with Bugatti twice in the late 1920s.