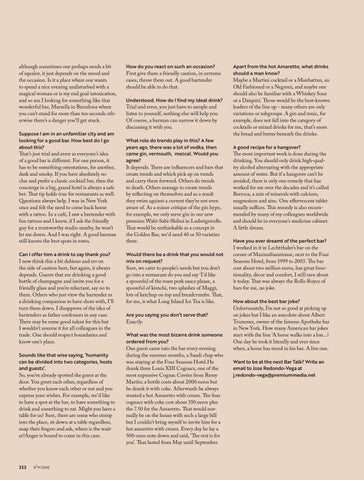 although sometimes one perhaps needs a bit of squalor, it just depends on the mood and the occasion. Is it a place where one wants to spend a nice evening undisturbed with a magical woman or is my end goal intoxication, and so am I looking for something like that wonderful bar, Marsella in Barcelona where you can’t stand for more than ten seconds otherwise there’s a danger you’ll get stuck. Suppose I am in an unfamiliar city and am looking for a good bar. How best do I go about this?

That’s just trial and error as everyone’s idea of a good bar is different. For one person, it has to be something ostentatious, for another, dark and smoky. If you have absolutely no clue and prefer a classic cocktail bar, then the concierge in a big, grand hotel is always a safe bet. That tip holds true for restaurants as well. Questions always help. I was in New York once and felt the need to come back home with a tattoo. In a café, I saw a bartender with fun tattoos and I knew, if I ask the friendly guy for a trust­worthy studio nearby, he won’t let me down. And I was right. A good barman still knows the best spots in town. Can I offer him a drink to say thank you?

I now think this a bit dubious and err on the side of caution here, but again, it always depends. Guests that are drinking a good bottle of champagne and invite you for a friendly glass and you’re reluctant, say no to them. Others who just view the bartender as a drinking companion to have shots with, I’ll turn them down. I disapprove of the idea of bartenders as father confessors in any case. There may be some good talent for this but I wouldn’t assume it for all colleagues in the trade. One should respect boundaries and know one’s place. Sounds like that wise saying, ‘humanity can be divided into two categories, hosts and guests’.

So, you’ve already spotted the guest at the door. You greet each other, regardless of whether you know each other or not and you express your wishes. For example, we’d like to have a spot at the bar, to have something to drink and something to eat. Might you have a table for us? Sure, there are some who stomp into the place, sit down at a table regardless, snap their fingers and ask, where is the waiter?Anger is bound to come in this case.

How do you react on such an occasion?

First give them a friendly caution, in extreme cases, throw them out. A good bartender should be able to do that. Understood. How do I find my ideal drink?

Trial and error, you just have to sample and listen to yourself, nothing else will help you. Of course, a barman can narrow it down by discussing it with you. What role do trends play in this? A few years ago, there was a lot of vodka, then came gin, vermouth, mezcal. Would you agree?

It depends. There are influencers and bars that create trends and which pick up on trends and carry them forward. Others do trends to death. Others manage to create trends by reflecting on themselves and as a result they swim against a current they’re not even aware of. As a minor critique of the gin hype, for example, we only serve gin in our new premises Wabi-Sabi-Shibui in Ludwigstraﬂe. That would be unthinkable as a concept in the Golden Bar, we’d need 40 or 50 varieties there. Would there be a drink that you would not mix on request?

Sure, we cater to people’s needs but you don’t go into a restaurant do you and say ‘I’d like a spoonful of the roast pork sauce please, a spoonful of kimchi, two splashes of Maggi, lots of ketchup on top and breadcrumbs. That, for me, is what Long Island Ice Tea is like. Are you saying you don’t serve that?

What was the most bizarre drink someone ordered from you?

One guest came into the bar every evening during the summer months, a Saudi chap who was staying at the Four Seasons Hotel.He drank three Louis XIII Cognacs, one of the most expensive Cognac Cuvées from Remy Martin; a bottle costs about 2000 euros but he drank it with coke. Afterwards he always wanted a hot Amaretto with cream. The four cognacs with coke cost about 350 euros plus the 7.50 for the Amaretto. That would normally be on the house with such a large bill but I couldn’t bring myself to invite him for a hot amaretto with cream. Every day he lay a 500-euro note down and said, ‘The rest is for you’. That lasted from May until September.

Apart from the hot Amaretto, what drinks should a man know?

Maybe a Martini cocktail or a Manhattan, an Old Fashioned or a Negroni, and maybe one should also be familiar with a Whiskey Sour or a Daiquiri. Those would be the best-known leaders of the line up - many others are only variations or subgroups. A gin and tonic, for example, does not fall into the category of cocktails or mixed drinks for me, that’s more the bread and butter beneath the drinks. A good recipe for a hangover?

The most important work is done during the drinking. You should only drink high-quality alcohol alternating with the appropriate amount of water. But if a hangover can’t be avoided, there is only one remedy that has worked for me over the decades and it’s called Berroca, a mix of minerals with calcium, magnesium and zinc. One effervescent tablet usually suffices. This remedy is also recommended by many of my colleagues worldwide and should be in everyone’s medicine cabinet. A little dream. Have you ever dreamt of the perfect bar?

I worked in it in Lechtthaler’s bar on the corner of Maximilianstrasse, next to the Four Seasons Hotel, from 1999 to 2003. The bar cost about two million euros, has great functionality, décor and comfort, I still rave about it today. That was always the Rolls-Royce of bars for me, no joke. How about the best bar joke?

Unfortunately, I’m not so good at picking up on jokes but I like an anecdote about Albert Trummer, owner of the famous Apotheke bar in New York. How many American bar jokes start with the line ‘A horse walks into a bar...? One day he took it literally and ever since when, a horse has stood in his bar. A live one. Want to be at the next Bar Talk? Write an email to Jose Redondo-Vega at j.redondo-vega@premiummedia.net