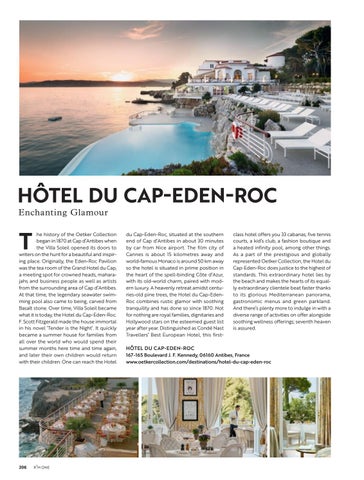 he history of the Oetker Collection began in 1870 at Cap d’Antibes when the Villa Soleil opened its doors to writers on the hunt for a beautiful and inspiring place. Originally, the Eden-Roc Pavilion was the tea room of the Grand Hotel du Cap, a meeting spot for crowned heads, maharajahs and business people as well as artists from the surrounding area of Cap d’Antibes. At that time, the legendary seawater swimming pool also came to being, carved from Basalt stone. Over time, Villa Soleil became what it is today, the Hotel du Cap-Eden-Roc. F. Scott Fitzgerald made the house immortal in his novel ‘Tender is the Night’. It quickly became a summer house for families from all over the world who would spend their summer months here time and time again, and later their own children would return with their children. One can reach the Hotel

du Cap-Eden-Roc, situated at the southern end of Cap d’Antibes in about 30 minutes by car from Nice airport. The film city of Cannes is about 15 kilometres away and world-famous Monaco is around 50 km away so the hotel is situated in prime position in the heart of the spell-binding Côte d’Azur, with its old-world charm, paired with modern luxury. A heavenly retreat amidst centuries-old pine trees, the Hotel du Cap-EdenRoc combines rustic glamor with soothing tranquility and has done so since 1870. Not for nothing are royal families, dignitaries and Hollywood stars on the esteemed guest list year after year. Distinguished as Condé Nast Travellers’ Best European Hotel, this first-

class hotel offers you 33 cabanas, five tennis courts, a kid’s club, a fashion boutique and a heated infinity pool, among other things. As a part of the prestigious and globally ­represented Oetker Collection, the Hotel du Cap-Eden-Roc does justice to the highest of standards. This extraordinary hotel lies by the beach and makes the hearts of its equally extraordinary clientele beat faster thanks to its glorious Mediterranean panorama, gastronomic menus and green parkland. And there’s plenty more to indulge in with a diverse range of activities on offer alongside soothing wellness offerings; seventh heaven is assured.