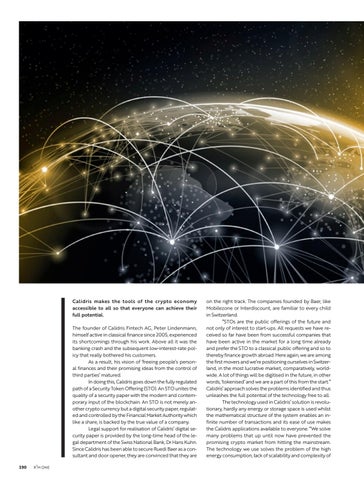 Calidris makes the tools of the crypto economy ­accessible to all so that everyone can achieve their full potential. The founder of Calidris Fintech AG, Peter Lindenmann, himself active in classical finance since 2005, experienced its shortcomings through his work. Above all it was the banking crash and the subsequent low-interest-rate policy that really bothered his customers. As a result, his vision of ‘freeing people’s personal finances and their promising ideas from the control of third parties’ matured. In doing this, Calidris goes down the fully regulated path of a Security Token Offering (STO). An STO unites the quality of a security paper with the modern and contemporary input of the blockchain. An STO is not merely another crypto currency but a digital security paper, regulated and controlled by the Financial Market Authority which like a share, is backed by the true value of a company. Legal support for realisation of Calidris’ digital security paper is provided by the long-time head of the legal department of the Swiss National Bank, Dr Hans Kuhn. Since Calidris has been able to secure Ruedi Baer as a consultant and door opener, they are convinced that they are 190

on the right track. The companies founded by Baer, like Mobilezone or Interdiscount, are familiar to every child in Switzerland. “STOs are the public offerings of the future and not only of interest to start-ups. All requests we have received so far have been from successful companies that have been active in the market for a long time already and prefer the STO to a classical public offering and so to thereby finance growth abroad. Here again, we are among the first movers and we’re positioning ourselves in Switzerland, in the most lucrative market, comparatively, worldwide. A lot of things will be digitised in the future, in other words, ‘tokenised’ and we are a part of this from the start.” Calidris’ approach solves the problems identified and thus unleashes the full potential of the technology free to all. The technology used in Calidris’ solution is revolutionary, hardly any energy or storage space is used whilst the mathematical structure of the system enables an infinite number of transactions and its ease of use makes the Calidris applications available to everyone. “We solve many problems that up until now have prevented the promising crypto market from hitting the mainstream. The technology we use solves the problem of the high energy consumption, lack of scalability and complexity of