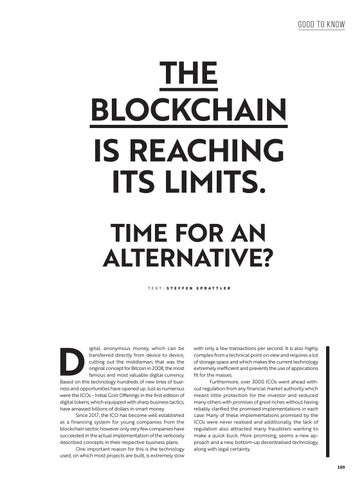 THE BLOCKCHAIN IS REACHING ITS LIMITS. TIME FOR AN ALTERNATIVE? TEXT: ST EFFEN

igital, anonymous money, which can be transferred directly from device to device, cutting out the middleman; that was the original concept for Bitcoin in 2008, the most famous and most valuable digital currency. Based on this technology hundreds of new lines of business and opportunities have opened up. Just as numerous were the ICOs - Initial Coin Offerings in the first edition of digital tokens, which equipped with sharp business tactics, have amassed billions of dollars in smart money. Since 2017, the ICO has become well established as a financing system for young companies from the blockchain sector, however only very few companies have succeeded in the actual implementation of the verbosely described concepts in their respective business plans. One important reason for this is the technology used, on which most projects are built, is extremely slow

with only a few transactions per second. It is also highly complex from a technical point on view and requires a lot of storage space and which makes the current technology extremely inefficient and prevents the use of applications fit for the masses. Furthermore, over 3000 ICOs went ahead without regulation from any financial market authority which meant little protection for the investor and seduced many others with promises of great riches without Â­having reliably clarified the promised implementations in each case. Many of these implementations promised by the ICOs were never realised and additionally, the lack of Â­regulation also attracted many fraudsters wanting to make a quick buck. More promising, seems a new approach and a new, bottom-up decentralised technology, along with legal certainty. 189