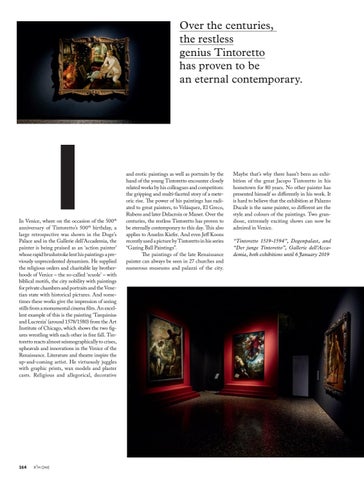 Over the centuries, the restless genius Tintoretto has proven to be an eternal contemporary.

In Venice, where on the occasion of the 500th anniversary of Tintoretto’s 500th birthday, a large retrospective was shown in the Doge’s Palace and in the Gallerie dell’Accademia, the painter is being praised as an ‘action painter’ whose rapid brushstroke lent his paintings a previously unprecedented dynamism. He supplied the religious orders and charitable lay brotherhoods of Venice – the so-called ‘scuole’ – with biblical motifs, the city nobility with paintings for private chambers and portraits and the Venetian state with historical pictures. And sometimes these works give the impression of seeing stills from a monumental cinema film. An excellent example of this is the painting ‘Tarquinius and Lucrezia’ (around 1578/1580) from the Art Institute of Chicago, which shows the two figures wrestling with each other in free fall. Tintoretto reacts almost seismographically to crises, upheavals and innovations in the Venice of the Renaissance. Literature and theatre inspire the up-and-coming artist. He virtuously juggles with graphic prints, wax models and plaster casts. Religious and allegorical, ­decorative

and erotic paintings as well as portraits by the hand of the young Tintoretto encounter closely related works by his colleagues and competitors: the gripping and multi-faceted story of a meteoric rise. The power of his paintings has radiated to great painters, to Velásquez, El Greco, Rubens and later Delacroix or Manet. Over the centuries, the restless Tintoretto has proven to be eternally contemporary to this day. This also applies to Anselm Kiefer. And even Jeff Koons recently used a picture by Tintoretto in his series “Gazing Ball Paintings”. The paintings of the late Renaissance painter can always be seen in 27 churches and numerous museums and palazzi of the city.

Maybe that’s why there hasn’t been an exhibition of the great Jacopo Tintoretto in his hometown for 80 years. No other painter has presented himself so differently in his work. It is hard to believe that the exhibition at Palazzo Ducale is the same painter, so different are the style and colours of the paintings. Two grandiose, extremely exciting shows can now be admired in Venice. “Tintoretto 1519-1594”, Dogenpalast, and “Der junge Tintoretto”, Gallerie dell’Accademia, both exhibitions until 6 January 2019