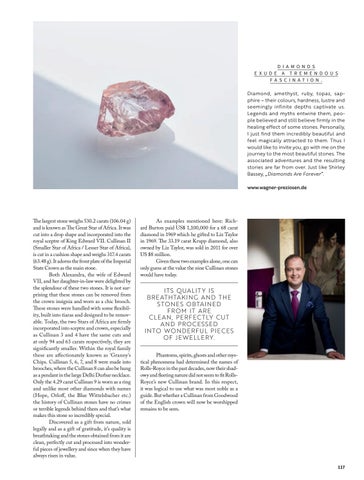 D I A M O N DS E X U D E A T R EM EN D O US FA S C I N AT I O N . Diamond, amethyst, ruby, topaz, sapphire – their colours, hardness, lustre and seemingly infinite depths captivate us. Legends and myths entwine them, people believed and still believe firmly in the healing effect of some stones. Personally, I just find them incredibly beautiful and feel magically attracted to them. Thus I would like to invite you, go with me on the journey to the most beautiful stones. The associated adventures and the resulting stories are far from over. Just like Shirley Bassey, „Diamonds Are Forever“. www.wagner-preziosen.de

The largest stone weighs 530.2 carats (106.04 g) and is known as The Great Star of Africa. It was cut into a drop shape and incorporated into the royal sceptre of King Edward VII. Cullinan II (Smaller Star of Africa / Lesser Star of Africa), is cut in a cushion shape and weighs 317.4 carats (63.48 g). It adorns the front plate of the Imperial State Crown as the main stone. Both Alexandra, the wife of Edward VII, and her daughter-in-law were delighted by the splendour of these two stones. It is not surprising that these stones can be removed from the crown insignia and worn as a chic brooch. These stones were handled with some flexibility, built into tiaras and designed to be removable. Today, the two Stars of Africa are firmly incorporated into sceptre and crown, especially as Cullinan 3 and 4 have the same cuts and at only 94 and 63 carats respectively, they are significantly smaller. Within the royal family these are affectionately known as ‘Granny’s Chips. Cullinan 5, 6, 7, and 8 were made into brooches, where the Cullinan 8 can also be hung as a pendant in the large Delhi Durbar necklace. Only the 4.29 carat Cullinan 9 is worn as a ring and unlike most other diamonds with names (Hope, Orloff, the Blue Wittelsbacher etc.) the history of Cullinan stones have no crimes or t­ errible legends behind them and that’s what makes this stone so incredibly special. Discovered as a gift from nature, sold legally and as a gift of gratitude, it’s quality is breathtaking and the stones obtained from it are clean, perfectly cut and processed into wonderful pieces of jewellery and since when they have always risen in value.

As examples mentioned here: Richard Burton paid US$ 1,100,000 for a 68 carat diamond in 1969 which he gifted to Liz Taylor in 1969. The 33.19 carat Krupp diamond, also owned by Liz Taylor, was sold in 2011 for over US $8 million. Given these two examples alone, one can only guess at the value the nine Cullinan stones would have today.

IT S QUA LIT Y IS B R E AT H TA KIN G A N D T H E S T O N E S O B TA IN E D F R O M IT A R E C LE A N , P E R F EC T LY C UT A N D P R O C E SS E D IN T O WO N D E R F UL P IEC E S O F JE W E LLE R Y. Phantoms, spirits, ghosts and other mystical phenomena had determined the names of Rolls-Royce in the past decades, now their shadowy and fleeting nature did not seem to fit RollsRoyce’s new Cullinan brand. In this respect, it was logical to use what was most noble as a guide. But whether a Cullinan from Goodwood of the English crown will now be ­worshipped remains to be seen.