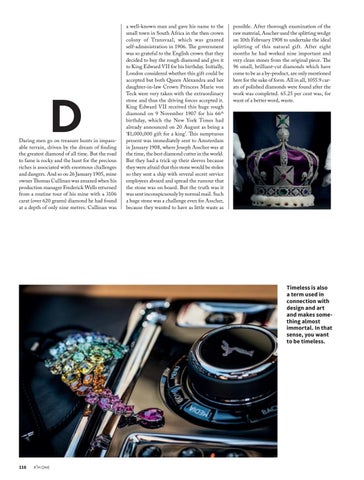 Daring men go on treasure hunts in impassable terrain, driven by the dream of finding the greatest diamond of all time. But the road to fame is rocky and the hunt for the precious riches is associated with enormous challenges and dangers. And so on 26 January 1905, mine owner Thomas Cullinan was amazed when his production manager Frederick Wells returned from a routine tour of his mine with a 3106 carat (over 620 grams) diamond he had found at a depth of only nine metres. Cullinan was

a well-known man and gave his name to the small town in South Africa in the then crown colony of Transvaal, which was granted self-administration in 1906. The government was so grateful to the English crown that they decided to buy the rough diamond and give it to King Edward VII for his birthday. Initially, London considered whether this gift could be accepted but both Queen Alexandra and her daughter-in-law Crown Princess Marie von Teck were very taken with the extraordinary stone and thus the driving forces accepted it. King Edward VII received this huge rough diamond on 9 November 1907 for his 66th birthday, which the New York Times had already announced on 20 August as being a â&#x20AC;&#x2DC;$1,000,000 gift for a kingâ&#x20AC;&#x2122;. This sumptuous present was immediately sent to Amsterdam in January 1908, where Joseph Asscher was at the time, the best diamond cutter in the world. But they had a trick up their sleeves because they were afraid that this stone would be stolen so they sent a ship with several secret service employees aboard and spread the rumour that the stone was on board. But the truth was it was sent inconspicuously by normal mail. Such a huge stone was a challenge even for Asscher, because they wanted to have as little waste as

possible. After thorough examination of the raw material, Asscher used the splitting wedge on 10th February 1908 to undertake the ideal splitting of this natural gift. After eight months he had worked nine important and very clean stones from the original piece. The 96 small, brilliant-cut diamonds which have come to be as a by-product, are only mentioned here for the sake of form. All in all, 1055.9 carats of polished diamonds were found after the work was completed. 65.25 per cent was, for want of a better word, waste.

Timeless is also a term used in connection with design and art and makes something almost immortal. In that sense, you want to be timeless.