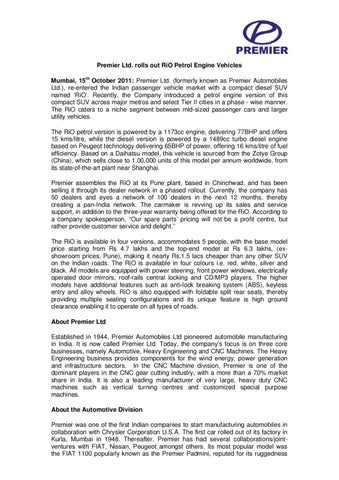 Premier Ltd. rolls out RiO Petrol Engine Vehicles Mumbai, 15th October 2011: Premier Ltd. (formerly known as Premier Automobiles Ltd.), re-entered the Indian passenger vehicle market with a compact diesel SUV named ‘RiO’. Recently, the Company introduced a petrol engine version of this compact SUV across major metros and select Tier II cities in a phase - wise manner. The RiO caters to a niche segment between mid-sized passenger cars and larger utility vehicles. The RiO petrol version is powered by a 1173cc engine, delivering 77BHP and offers 15 kms/litre, while the diesel version is powered by a 1489cc turbo diesel engine based on Peugeot technology delivering 65BHP of power, offering 16 kms/litre of fuel efficiency. Based on a Daihatsu model, this vehicle is sourced from the Zotye Group (China), which sells close to 1,00,000 units of this model per annum worldwide, from its state-of-the-art plant near Shanghai. Premier assembles the RiO at its Pune plant, based in Chinchwad, and has been selling it through its dealer network in a phased rollout. Currently, the company has 50 dealers and eyes a network of 100 dealers in the next 12 months, thereby creating a pan-India network. The carmaker is revving up its sales and service support, in addition to the three-year warranty being offered for the RiO. According to a company spokesperson, “Our spare parts’ pricing will not be a profit centre, but rather provide customer service and delight.” The RiO is available in four versions, accommodates 5 people, with the base model price starting from Rs 4.7 lakhs and the top-end model at Rs 6.3 lakhs, (exshowroom prices, Pune), making it nearly Rs.1.5 lacs cheaper than any other SUV on the Indian roads. The RiO is available in four colours i.e. red, white, silver and black. All models are equipped with power steering, front power windows, electrically operated door mirrors, roof-rails central locking and CD/MP3 players. The higher models have additional features such as anti-lock breaking system (ABS), keyless entry and alloy wheels. RiO is also equipped with foldable split rear seats, thereby providing multiple seating configurations and its unique feature is high ground clearance enabling it to operate on all types of roads. About Premier Ltd Established in 1944, Premier Automobiles Ltd pioneered automobile manufacturing in India. It is now called Premier Ltd. Today, the company’s focus is on three core businesses, namely Automotive, Heavy Engineering and CNC Machines. The Heavy Engineering business provides components for the wind energy, power generation and infrastructure sectors. In the CNC Machine division, Premier is one of the dominant players in the CNC gear cutting industry, with a more than a 70% market share in India. It is also a leading manufacturer of very large, heavy duty CNC machines such as vertical turning centres and customized special purpose machines. About the Automotive Division Premier was one of the first Indian companies to start manufacturing automobiles in collaboration with Chrysler Corporation U.S.A. The first car rolled out of its factory in Kurla, Mumbai in 1948. Thereafter, Premier has had several collaborations/jointventures with FIAT, Nissan, Peugeot amongst others. Its most popular model was the FIAT 1100 popularly known as the Premier Padmini, reputed for its ruggedness

and reliability. Premier has also successfully launched several other models including the popular 118NE, Fiat UNO and various diesel variants. In 2000, it discontinued its Premier Padmini production, temporarily withdrawing from the passenger vehicle segment. Currently it manufactures a diesel van, SIGMA, with variants in the form of an ambulance, tourist taxi and school bus. Its portfolio also includes a 1.5 ton light commercial vehicle called the Premier Roadstar. 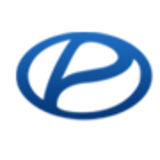