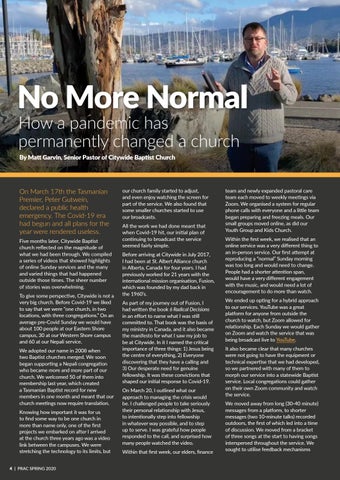 No More Normal How a pandemic has permanently changed a church By Matt Garvin, Senior Pastor of Citywide Baptist Church

On March 17th the Tasmanian Premier, Peter Gutwein, declared a public health emergency. The Covid-19 era had begun and all plans for the year were rendered useless. Five months later, Citywide Baptist church reflected on the magnitude of what we had been through. We compiled a series of videos that showed highlights of online Sunday services and the many and varied things that had happened outside those times. The sheer number of stories was overwhelming. To give some perspective, Citywide is not a very big church. Before Covid-19 we liked to say that we were “one church, in two locations, with three congregations.” On an average pre-Covid Sunday we would have about 100 people at our Eastern Shore campus, 30 at our Western Shore campus and 60 at our Nepali service. We adopted our name in 2008 when two Baptist churches merged. We soon began supporting a Nepali congregation who became more and more part of our church. We welcomed 50 of them into membership last year, which created a Tasmanian Baptist record for new members in one month and meant that our church meetings now require translation. Knowing how important it was for us to find some way to be one church in more than name only, one of the first projects we embarked on after I arrived at the church three years ago was a video link between the campuses. We were stretching the technology to its limits, but 4 | PRAC SPRING 2020

our church family started to adjust, and even enjoy watching the screen for part of the service. We also found that some smaller churches started to use our broadcasts. All the work we had done meant that when Covid-19 hit, our initial plan of continuing to broadcast the service seemed fairly simple. Before arriving at Citywide in July 2017, I had been at St. Albert Alliance church in Alberta, Canada for four years. I had previously worked for 21 years with the international mission organisation, Fusion, which was founded by my dad back in the 1960’s. As part of my journey out of Fusion, I had written the book 6 Radical Decisions in an effort to name what I was still committed to. That book was the basis of my ministry in Canada, and it also became the manifesto for what I saw my job to be at Citywide. In it I named the critical importance of three things: 1) Jesus being the centre of everything, 2) Everyone discovering that they have a calling and 3) Our desperate need for genuine fellowship. It was these convictions that shaped our initial response to Covid-19. On March 20, I outlined what our approach to managing the crisis would be. I challenged people to take seriously their personal relationship with Jesus, to intentionally step into fellowship in whatever way possible, and to step up to serve. I was grateful how people responded to the call, and surprised how many people watched the video. Within that first week, our elders, finance

team and newly expanded pastoral care team each moved to weekly meetings via Zoom. We organised a system for regular phone calls with everyone and a little team began preparing and freezing meals. Our small groups moved online, as did our Youth Group and Kids Church. Within the first week, we realised that an online service was a very different thing to an in-person service. Our first attempt at reproducing a “normal” Sunday morning was too long and would need to change. People had a shorter attention span, would have a very different engagement with the music, and would need a lot of encouragement to do more than watch. We ended up opting for a hybrid approach to our services. YouTube was a great platform for anyone from outside the church to watch, but Zoom allowed for relationship. Each Sunday we would gather on Zoom and watch the service that was being broadcast live to YouTube. It also became clear that many churches were not going to have the equipment or technical expertise that we had developed, so we partnered with many of them to morph our service into a statewide Baptist service. Local congregations could gather on their own Zoom community and watch the service. We moved away from long (30-40 minute) messages from a platform, to shorter messages (two 10-minute talks) recorded outdoors, the first of which led into a time of discussion. We moved from a bracket of three songs at the start to having songs interspersed throughout the service. We sought to utilise feedback mechanisms PRAC SPRING EDITION 2020 - Coping With Covid - How Churches Have Responded

This edition looks at how Baptist churches have responded to the challenges and opportunities of Covid-19. It includes stories of how church...

PRAC SPRING EDITION 2020 - Coping With Covid - How Churches Have Responded

This edition looks at how Baptist churches have responded to the challenges and opportunities of Covid-19. It includes stories of how church...