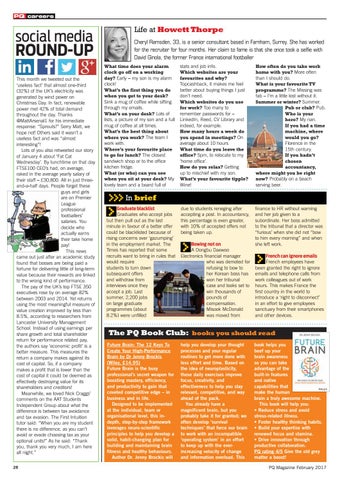 social media ROUND-UP This month we tweeted out the ‘useless fact’ that almost one-third (32%) of the UK’s electricity was generated by wind power on Christmas Day. In fact, renewable power met 42% of total demand throughout the day. Thanks @MattArsenal1 for his immediate response: “Sprouts?” Sorry Matt, we hope not! Others said it wasn’t a useless fact and was “almost interesting”! Lots of you also retweeted our story of January 4 about ‘Fat Cat Wednesday’. By lunchtime on that day FTSE100 CEO’s had, on average, raked in the average yearly salary of their staff – £30,800. All in just threeand-a-half days. People forget these guys and girls are on Premier League professional footballers’ salaries. You decide who actually earns their take home pay! This news came out just after an academic study found that bosses are being paid a fortune for delivering little of long-term value because their rewards are linked to the wrong kind of performance. The pay of the UK’s top FTSE 350 executives rose by on average 82% between 2003 and 2014. Yet returns using the most meaningful measure of value creation improved by less than 8.5%, according to researchers from Lancaster University Management School. Instead of using earnings per share growth and total shareholder return for performance related pay, the authors say ‘economic profit’ is a better measure. This measures the return a company makes against its cost of capital. So, if a company makes a profit that is lower than the cost of capital it could be deemed as effectively destroying value for its shareholders and creditors! Meanwhile, we loved Nick Craggs’ comments on the AAT Students Independent Group about what the difference is between tax avoidance and tax evasion. The First Intuition tutor said: “When you are my student there is no difference, as you can’t avoid or evade choosing tax as your optional units!” As he said: “Thank you, thank you very much, I am here all night.” 28

Life at Howett Thorpe Cheryl Ramsden, 33, is a senior consultant based in Farnham, Surrey. She has worked for the recruiter for four months. Her claim to fame is that she once took a selfie with David Ginola, the former France international footballer What time does your alarm clock go off on a working day? Early – my son is my alarm clock! What’s the first thing you do when you get to your desk? Sink a mug of coffee while sifting through my emails. What’s on your desk? Lots of lists, a picture of my son and a full mug of coffee at all times. What’s the best thing about where you work? The team I work with. Where’s your favourite place to go for lunch? The closest sandwich shop or to the office kitchen fridge. What (or who) can you see when you sit at your desk? My lovely team and a board full of

stats and job info. Which websites are your favourites and why? Topcashback, it makes me feel better about buying things I just don’t need. Which websites do you use for work? Too many to remember passwords for – LinkedIn, Reed, CV Library and indeed, for example. How many hours a week do you spend in meetings? On average about 10 hours What time do you leave the office? 5pm, to relocate to my ‘home office’. How do you relax? Getting up to mischief with my son. What’s your favourite tipple? Wine!

How often do you take work home with you? More often than I should do. What is your favourite TV programme? The Missing was fab – I’m a little lost without it. Summer or winter? Summer. Pub or club? Pub. Who is your hero? My nan. If you had a time machine, where would you go? Florence in the 15th century. If you hadn’t chosen accountancy, where might you be right now? Probably on a beach serving beer.

due to students reneging after accepting a post. In accountancy, this percentage is even greater, with 10% of accepted offers not being taken up.

finance to HR without warning and her job given to a subordinate. Her boss admitted to the tribunal that a director was “furious’ when she did not “bow to him every morning” and when she left work.

In brief Graduate blacklist Graduates who accept jobs but then pull out as the last minute in favour of a better offer could be blacklisted because of rising concerns over ‘gazumping’ in the employment market. The Times has reported that some recruits want to bring in rules that would require students to turn down subsequent offers and withdraw from interviews once they accept a job. Last summer, 2,200 jobs on large graduate programmes (about 8.2%) were unfilled

Bowing not on A Dongbu Daewoo Electronics financial manager who was demoted for refusing to bow to her Korean boss has won her tribunal case and looks set to win thousands of pounds of compensation. Misook McDonald was moved from

French can ignore emails French employees have been granted the right to ignore emails and telephone calls from work colleagues out of work hours. This makes France the first country in the world to introduce a ‘right to disconnect’ in an effort to give employees sanctuary from their smartphones and other devices.

The PQ Book Club: books you should read Future Brain: The 12 Keys To Create Your High-Performance Brain by Dr Jenny Brockis (Wiley, £14.95) Future Brain is the busy professional’s secret weapon for boosting mastery, efficiency, and productivity to gain that coveted competitive edge – in business and in life. Designed to be implemented at the individual, team or organisational level, this indepth, step-by-step framework leverages neuro-scientific principles to help you develop a solid, habit-changing plan for building and maintaining brain fitness and healthy behaviours. Author Dr. Jenny Brockis will

help you develop your thought processes and your regular routines to get more done with less effort and time. Based on the idea of neuroplasticity, these daily exercises improve focus, creativity, and effectiveness to help you stay relevant, competitive, and way ahead of the pack. You already have a magnificent brain, but you probably take it for granted; we often develop ‘survival techniques’ that force our brain to work with an incompatible ‘operating system’ in an effort to keep up with the everincreasing velocity of change and information overload. This

book helps you beef up your brain awareness so you can take advantage of the built-in features and native capabilities that make the human brain a truly awesome machine. This book will help you: • Reduce stress and avoid stress-related illness. • Foster healthy thinking habits. • Build your expertise with renewed focus and stamina. • Drive innovation through productive collaboration. PQ rating 4/5 Give the old grey matter a boost! PQ Magazine February 2017 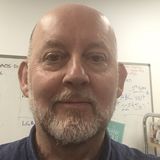 PQ is a free monthly magazine for student accountants, focusing mainly on the ACCA, CIMA, CIPFA, ICAEW and AAT qualifications. It's packed f...

PQ is a free monthly magazine for student accountants, focusing mainly on the ACCA, CIMA, CIPFA, ICAEW and AAT qualifications. It's packed f...