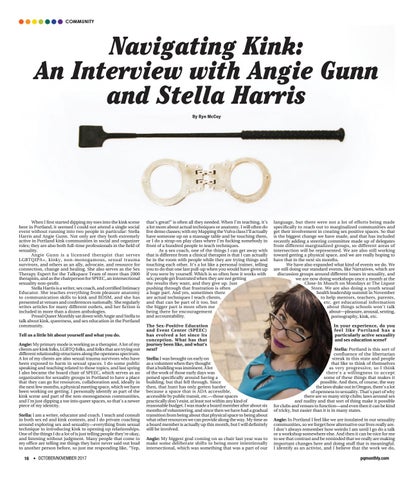 Navigating Kink: An Interview with Angie Gunn and Stella Harris By Ryn McCoy

When I first started dipping my toes into the kink scene here in Portland, it seemed I could not attend a single social event without running into two people in particular: Stella Harris and Angie Gunn. Not only are they both extremely active in Portland kink communities in social and organizer roles; they are also both full-time professionals in the field of sexuality. Angie Gunn is a licensed therapist that serves LGBTQIPA+, kinky, non-monogamous, sexual trauma survivors, and others as an ally, advocate, and resource for connection, change and healing. She also serves as the Sex Therapy Expert for the Talkspace Team of more than 2000 therapists, and as the chairperson for SPEEC, an intersectional sexuality non-profit. Stella Harris is a writer, sex coach, and certified Intimacy Educator. She teaches everything from pleasure anatomy to communication skills to kink and BDSM, and she has presented at venues and conferences nationally. She regularly writes articles for many different outlets, and her fiction is included in more than a dozen anthologies. Proud Queer Monthly sat down with Angie and Stella to talk about kink, queerness, and sex education in the Portland community. Tell us a little bit about yourself and what you do. Angie: My primary mode is working as a therapist. A lot of my clients are kink folks, LGBTQ folks, and folks that are trying out different relationship structures along the openness spectrum. A lot of my clients are also sexual trauma survivors who have been exposed to harm in sexual spaces. I do some public speaking and teaching related to those topics, and last spring I also became the board chair of SPEEC, which serves as an organization for sexuality groups in Portland to have a place that they can go for resources, collaboration and, ideally in the next few months, a physical meeting space, which we have been working on getting. I personally identify as part of the kink scene and part of the non-monogamous communities, and I’m just dipping a toe into queer spaces, so that’s a newer piece of my identity. Stella: I am a writer, educator and coach. I teach and consult in both sex ed and kink contexts, and I do private coaching around exploring sex and sexuality—everything from sexual technique to introducing kink to opening up relationships. One of the things I do a lot of is just telling people they’re okay, and listening without judgment. Many people that come to my office are telling me things they have never said out loud to another person before, so just me responding like, “Yep,

that’s great!” is often all they needed. When I’m teaching, it’s a lot more about actual techniques or anatomy. I will often do live demo classes; with my Mapping the Vulva class I’ll actually have someone up on a massage table and be touching them, or I do a strap-on play class where I’m fucking somebody in front of a hundred people to teach techniques. As a sex coach, one of the things I can get away with that is different from a clinical therapist is that I can actually be in the room with people while they are trying things and touching each other. It’s a lot like a personal trainer, telling you to do that one last pull-up when you would have given up if you were by yourself. Which is so often how it works with sex; people get frustrated when they are not getting the results they want, and they give up. Just pushing through that frustration is often a huge part. And yes, sometimes there are actual techniques I teach clients, and that can be part of it too, but the bigger part is more often me being there for encouragement and accountability. The Sex-Positive Education and Event Center (SPEEC) has evolved a lot since its conception. What has that journey been like, and what’s next? Stella: I was brought on early on as a volunteer when they thought that a building was imminent. A lot of the work of those early days was poised specifically around having a building, but that fell through. Since then, that hunt has only gotten harder because a space that is ADA accessible, accessible by public transit, etc.—those spaces practically don’t exist, at least not within any kind of reasonable budget. I was made a board member after about six months of volunteering, and since then we have had a gradual transition from being about that physical space to being about what other resources we can provide along the way. My time as a board member is actually up this month, but I will definitely still be involved. Angie: My biggest goal coming on as chair last year was to make some deliberate shifts to being more intentionally intersectional, which was something that was a part of our

language, but there were not a lot of efforts being made specifically to reach out to marginalized communities and get their involvement in creating sex positive spaces. So that is the biggest change we have made, and that has included recently adding a steering committee made up of delegates from different marginalized groups, so different areas of intersection will be represented. We are also still working toward getting a physical space, and we are really hoping to have that in the next six months. We have also expanded what kind of events we do. We are still doing our standard events, like Narratives, which are discussion groups around different issues in sexuality, and we are now doing workshops once a month at the Close-In Munch on Mondays at The Liquor Store. We are also doing a youth sexual health leadership summit in November to help mentors, teachers, parents, etc. get educational information about things schools won’t talk about—pleasure, arousal, sexting, pornography, kink, etc. In your experience, do you feel l ik e P or tl and has a particularly active sexuality and sex education scene? Stella: Portland is this sort of confluence of the libertarian streak in this state and people that like to think of themselves as very progressive, so I think there’s a willingness to accept some of these things that makes it possible. And then, of course, the way the laws shake out in Oregon, there’s a lot of openness to sexuality. That’s part of why there are so many strip clubs; laws around sex and nudity and that sort of thing make it possible for clubs and venues to function—and even then it can be kind of tricky, but easier than it is in many states. Angie: In Portland I feel like we are insulated in our sexuality communities, so we forget how alternative our lives really are. I don’t always remember how weirdo I am until I go do a talk or a workshop somewhere else. And then it can be nice for me to see that contrast and be reminded that we really are making important changes here and doing stuff that is meaningful. I identify as an activist, and I believe that the work we do, 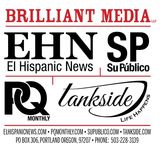