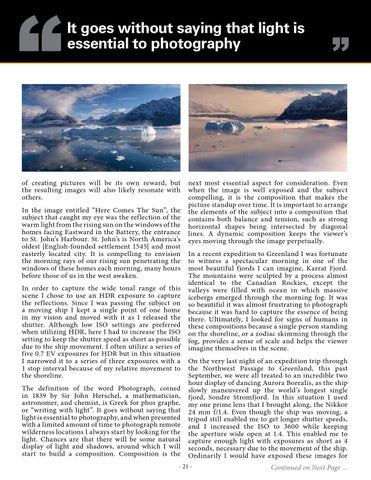 It goes without saying that light is essential to photography

of creating pictures will be its own reward, but the resulting images will also likely resonate with others. In the image entitled “Here Comes The Sun”, the subject that caught my eye was the reflection of the warm light from the rising sun on the windows of the homes facing Eastward in the Battery, the entrance to St. John’s Harbour. St. John’s is North America’s oldest [English-founded settlement 1545] and most easterly located city. It is compelling to envision the morning rays of our rising sun penetrating the windows of these homes each morning, many hours before those of us in the west awaken. In order to capture the wide tonal range of this scene I chose to use an HDR exposure to capture the reflections. Since I was passing the subject on a moving ship I kept a single point of one home in my vision and moved with it as I released the shutter. Although low ISO settings are preferred when utilizing HDR, here I had to increase the ISO setting to keep the shutter speed as short as possible due to the ship movement. I often utilize a series of five 0.7 EV exposures for HDR but in this situation I narrowed it to a series of three exposures with a 1 stop interval because of my relative movement to the shoreline. The definition of the word Photograph, coined in 1839 by Sir John Herschel, a mathematician, astronomer, and chemist, is Greek for phos graphe, or “writing with light”. It goes without saying that light is essential to photography, and when presented with a limited amount of time to photograph remote wilderness locations I always start by looking for the light. Chances are that there will be some natural display of light and shadows, around which I will start to build a composition. Composition is the

next most essential aspect for consideration. Even when the image is well exposed and the subject compelling, it is the composition that makes the picture standup over time. It is important to arrange the elements of the subject into a composition that contains both balance and tension, such as strong horizontal shapes being intersected by diagonal lines. A dynamic composition keeps the viewer’s eyes moving through the image perpetually. In a recent expedition to Greenland I was fortunate to witness a spectacular morning in one of the most beautiful fjords I can imagine, Karrat Fjord. The mountains were sculpted by a process almost identical to the Canadian Rockies, except the valleys were filled with ocean in which massive icebergs emerged through the morning fog. It was so beautiful it was almost frustrating to photograph because it was hard to capture the essence of being there. Ultimately, I looked for signs of humans in these compositions because a single person standing on the shoreline, or a zodiac skimming through the fog, provides a sense of scale and helps the viewer imagine themselves in the scene. On the very last night of an expedition trip through the Northwest Passage to Greenland, this past September, we were all treated to an incredible two hour display of dancing Aurora Borealis, as the ship slowly maneuvered up the world’s longest single fjord, Sondre Stromfjord. In this situation I used my one prime lens that I brought along, the Nikkor 24 mm f/1.4. Even though the ship was moving, a tripod still enabled me to get longer shutter speeds, and I increased the ISO to 3600 while keeping the aperture wide open at 1.4. This enabled me to capture enough light with exposures as short as 4 seconds, necessary due to the movement of the ship. Ordinarily I would have exposed these images for

Continued on Next Page ... 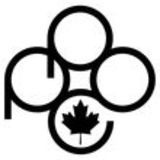 Aiming for Excellence! The Salon and Conference issue.

Aiming for Excellence! The Salon and Conference issue.